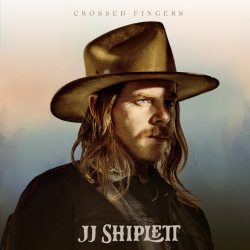 JJ Shiplett gives us an intriguing take on his own material with “Crossed Fingers”, a mirror image of his “Fingers Crossed” album, released in March this year with the addition of a new song `Bluejay Highway’. The album presents the songs that feature in “Fingers Crossed” in a spartan and revealing setting, with Shiplett’s aim being to “..take away the drums, the solos and leave it to my voice. Like how I fell in love with music – simple and honest. No hiding. Just the song.” The previous album featured a full backing band, but here we have only piano or guitar, with the occasional background presence of harmonica or electric guitar.

The aim is met on the first song `Waiting on the Rain’, the most successful piece on the album.  It immediately establishes a presence with the sound of feet walking and a stool being pulled up. It’s a clever, considered arrangement.  A piano provides the backing for Shiplett’s passionate, slightly rasping voice.  Shorn of a rock backing, it becomes the sound of honest vulnerability.  It’s the story of a person caught in foreboding, unable to live in the moment, someone “..living with my fingers crossed.”  The piano plays the musical trope of pitter-patter raindrops but then evolves into a more mournful register.

The sparse sound and restraint mean that the lyrics have space.  There’s rhythm and poetic beat in ‘Waiting on the Rain’ when Shiplett sings of “.. a stutter in my step / the lines in my face / and the strain in my voice”.  However, with this setting Shiplett’s voice turns also plain language into a felt emotion. ‘Closer’ is a story of a desperate barroom liaison to leaven the fact that “I’ve never known a love that can do away with regret”. The tone of `Stand On’ changes from defiance to a pleading, and “..you’re everything I’ve got” has a resonance not found on the original.  In “All Comes Back to You” Shiplett sings “Don’t ask where my heart is / When it’s still in the palm of your hands”. It isn’t poetry, but in reality people rarely speak beautifully in extremis.   Even the repeated lyric “..everything is beautiful” in ‘Freeman’ convinces you it is expressing something.

The album doesn’t present a re-imagining of the material on “Crossed Fingers”.  The pace of each song is similar to the sister album and the backing sticks firmly to a few selected instruments. However, it does achieve the stated aim of allowing the songs to breathe, and the reduced backing means you listen in a more intent way.  The material warrants it and as ever proves the familiar music mantra of less is more.

Stripped back songs that breathe