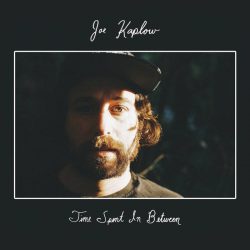 Joe Kaplow is unlikely to be a name familiar to many. Living in what he fondly refers to as “the rich Santa Cruz music community” Kaplow has found himself a base from which he can devote himself to his songwriting craft. Recording his music within the very walls where he resides, Kaplow has now released his debut album.

‘Time Spent In Between’ has, at its core, music that is firmly rooted in folk. Yes, there are changes in pace and direction along the way, but Kaplow’s use of acoustic guitar and harmonica hints at exactly where its heart is.

Kaplow has a voice that, when the songs are at their sparsest, brings to mind a million lazy comparisons with the wordsmiths of a certain age. But, to his credit, Kaplow ventures away from this safe zone with songs that stand out from the rest. The soft shoe shuffle and intricate guitar work on ‘OK and TX’ for example has a lovely feel to it and, as is the case throughout the album, Kaplow’s talents as a writer of clever lyrics are on show. The opening bitter line “Your love, your love, your love, your love like frost on a daisy” hints very quickly at where this song is headed.

‘Don’t Try To Stay’ is a rare foray into up-tempo territory that, with its prominent fiddle, borders on foot stomping country. At track listing number nine this comes as a bit of a surprise after what has gone before but that doesn’t stop it being one of the best on show. ‘Rhythm And Rhyme’ also fits into this category with some nice guitar work and changes in pace on display.

However, trumping all else in terms of musical twists and attention grabbing, is the deep groove and big bluesy sound of ‘Dusk Rattler’. Huge vocal chorus, big brassy accompaniment, great guitar solo and Kaplow really works his tonsils on this one. This is so left field in terms of the feel of the album it has the mixed blessing of being such a stand out that it relegates other, less bold and imaginative tracks, to the margins.

As a debut album and introduction to what he is about Kaplow has shown enough imagination to suggest that his decision to abandon the farm life of New Jersey for the uncertainties and financial knife edge of a full-time musician can be a sound one.

Debut album with imagination and promise from Santa Cruz based wordsmith