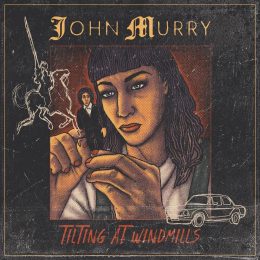 John Murry’s debut, 2013’s ‘The Graceless Age’, made many of that year’s Best Of lists. While it was his debut, Murry was already 34 and had recorded two albums with legendary Memphis singer-songwriter Bob Frank and an album of Waylon Jennings covers with Chuck Prophet, and it was clear that he was no ordinary artist. He was adopted into the family of author William Faulkner and was brought up in Tupelo, Mississippi, which helps explain his exploration of southern gothic and his absolute understanding of the various roots of rock’n’roll. The critical acclaim did not translate into commercial sales and the same was true of his second album, ‘A Short History Of Decay’, written following the break-up of his marriage and a move to Ireland.  The ‘Tilting At Windmills’  EP is John Murry’s debut release on Submarine Cat Records, a new UK independent label. It collects various cover versions recorded at various times over the last 10 years. It is a short memo, pending the release of a full album in 2021.

Cover versions recorded by gifted songwriters can be very interesting, bringing new insight to the work of an artist and their influences. This is undoubtedly the case with ‘Tilting At Windmills’ with tracks by The Immortal Souls, Big Star and Sparklehorse. Intrigue, and even surprise, are engendered by the inclusion of covers by Peter Gabriel, Robert Palmer and Abba. The tracks may have been recorded over a period of time but the fact that John Murry engaged with artist James Wilson to produce the cover art for the EP and the individual artwork of the tracks which have been released as singles means there is definitely a structure and purpose to the collection. The artwork is in the form of a graphic novel loosely based around the Don  Quixote novel and show John Murry illustrating various adolescent memories and song lyrics.

The newest recording on the EP is the lead track, a cover of Robert Palmer’s ‘Johnny and Mary’ which was used to advertise Renault many years ago. The song was inspired by the duplicity of politics and the impact this had on relationships and this original darkness is picked by John Murry in his version.  Next up is Peter Gabriel’s ‘Intruder’, and John Murry was inspired to cover it by an acid trip he had before he moved to Ireland. The original is about a break-in from the burglar’s point of view and was the first recorded example of the 80’s ubiquitous gated drum sound.  John Murry becomes a rocker for his cover of These Immortal Souls’ ‘King Of Kalifornia’, a song he is on record as saying he wishes he had written himself. The next track is probably the most surprising, a cover of Abba’s ‘Super Trooper’. John Murry recounts how he was at home in Tupelo, Mississippi, coming off dope and missing his daughter who loved ‘Mamma Mia’, so he recorded this track. While the Abba version may have had the disco sheen of the time, the song is actually about the trials and tribulations of being a performer. John Murry’s cover of Big Star’s ‘Holocaust’ is not in the least bit surprising but he finds the deep sadness of the song. Sparklehorse’s ‘Shade and Honey’ was originally recorded for a tribute album.

While there is not a lot of new music on ‘Tilting At Windmills’ each cover version can be seen as an adventure or quest, showing  John Murry’s journey as a human being and as such sheds new light on this very special artist. If you have ever enjoyed John Murry’s music then you will want to hear this musical novelette.