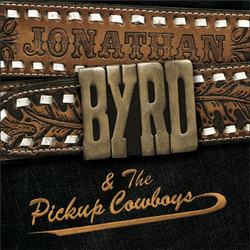 Actual country music! And really good country music too! Americana ebbs and flows in different ways, and obviously that’s a good thing. Now and again though, you can find country music produced that’s worthy of the weight of history in the field. Certainly not the factory produced, plastic Music Row atrocities that are increasingly favoured in the UK. Instead, step forward Jonathan Byrd, who’s been in the game for over fifteen years and is held in high regard at AUK towers. Of course he has the hat and beard that’s requisite for his trade, but rest assured readers, he’s the genuine  article.

The first two tracks are real bangers; as good as you’re likely to hear all year. ‘Pickup Cowboy’ swaps his trusty steed for a truck, roaming the land, don’t fence him in. ‘Tractor Pull’ is a twangy romp, where Byrd’s girl’s rig hitching skills lead to true love! ‘Temporary Tattoo’ is a folksy, fingerpicked ballad – a ‘see how it goes’ romance befitting such a commitment free gesture. ‘It Don’t’ Make Sense’ opens with a country cello! This gives  it an almost Beatle-esque feel, as once again Byrd laments on a relationship fallen by the wayside. Closer ‘Do You Dream’ is a statement big finish, building from fingerpicked guitar to harmony choir ending. Growing up, striving to achieve, and never giving up. It’s quite a tear-jerker. Byrd weaves convincing short stories with lyrical fire and skill. This is a gem of a record.