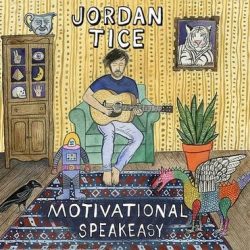 Jordan Tice has made an album of music which draws upon the guitar fingerpicking tradition of earlier Americana artists like John Fahey and Leo Kottke.  Tice uses his own quirky lyrics and flashes of humour which are reminiscent of Jeffrey Lewis especially on ‘Walkin’‘ or Devendra Barnhart.  ‘Motivational Speakeasy’ is a solo recording relying on his guitar and vocals to present his music which is gentle and positive in nature showcasing his clean and clear guitar playing style. The songs are not flashy or written in an overly complex manner so have a homespun laid back feeling. The overall mood of the album could be summed up in a line from ‘Matter of Time’ – “just do what you can, move a little more down the line, you’re going to make it where you’re going in a matter or time.”

Tice lives on outskirts of Nashville both geographically and is part of his own community of musicians joining together in late-night sessions to make music together. The album was produced by  Kenneth Pattengale of The Milk Carton Kids and comprises 11 songs, 3 of which are instrumentals (which are okay but don’t add much to the album).  Tice only makes a few references to the current state of the World within the music but there are some references to religion/belief across the album.  Overall there is a feeling of positivity pervading ‘Motivational Speakeasy’ which is a welcome distraction from our current predicament.