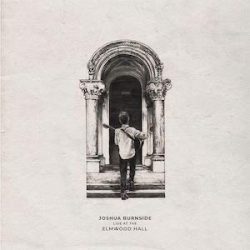 Releasing a live album can be a risky business. Capturing the essence of a show in a recording isn’t always easy. Credit then to Northern Irish singer-songwriter Joshua Burnside who, with ‘Live at The Elmwood Hall’ has produced an album that showcases his talents to the absolute max. Recorded in December 2018, Burnside is credited with responsibility for the mixing and he has delivered a lovely sounding album.

This is all about the voice. Elmwood Hall in Belfast is a former Presbyterian church and that clearly lends itself to some wonderful acoustics. In this environment Burnside’s vocals have a rare clarity and emotion that are enhanced even further when that broad Northern Irish accent comes to the fore.

If Burnside’s voice is the common thread here, echoing around the historic walls with a glorious resonance, then it is the musicians with whom he has surrounded himself that bring variety to this collection of Americana/Indie/Folk collection. Reworking tracks from albums including the Northern Irish Music prizewinning album ‘Ephrata’, the majority of the songs play out in a similar style and pace. However, take a bow Thomas Wall on trumpet, Zarah Fleming on cello, John Conway on Double Bass and Dan Byrne-McCullough on electric guitar for, as a whole they offer a perfect accompaniment but, individually, they take their turn in leading from the front and, as a result, the songs all retain a uniqueness about them.

As an example of how these live musicians bring a new vision to the songs listen to the electric guitar driven ‘A Man of High Renown’ here and then go back through the Americana UK archives to July 2018 where it is the accordion that is the lead. It is the same song but it is Byrne-McCullough’s guitar that breathes new life into the song in this live version.

Burnside set out to give the band as much free rein as possible to interpret and transform the songs, to expand and grow the recorded compositions into something unique and memorable. He must have been delighted at the outcome. For those music lovers who lean towards the folk side of the smorgasbord that is Americana then this offering will be a treat.

Wonderful live recording showcases the folk side of Americana

About Peter Churchill 107 Articles
Lover of intelligent singer-songwriters; a little bit country; a little bit folk; a little bit Americana. Perfect Day - early morning round of golf, afternoon at Dean Court watching AFC Bournemouth, evening gig at a cosy smallish venue with a pint and a packet of scratchings.