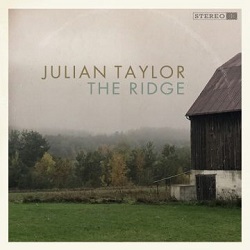 Julian Taylor is best known as the onetime front-man of Canadian rock band Staggered Crossing, and leader of his own blues/soul/rock outfit the Julian Taylor Band, but he also has a sideline going as a folky singer-songwriter in the great Canadian tradition – there’s something of Gordon Lightfoot touching a number of the songs on his latest release ‘The Ridge‘, notably on the title and opening track of the album. It’s a song about the Summers spent growing up at his grandparents’ rural home and the freedom that that allowed him – a freedom that, as a Canadian of West Indian and Mohawk descent Julian Taylor hasn’t always felt as an adult. This isn’t, however a protest song – unless regretting the loss of something as precious as a nurturing and safe homelife counts as a protest.

‘The Ridge‘ is a warm and rolling folk song, showcasing Taylor’s incredibly rich baritone to perfection and is an ideal first step into an album that is all about family links, people and humanity. Not all of the subsequent songs are as clearly autobiographical, a number are love ballads such as the gentle declaration of ‘Over the Moon‘ or the more troubled ‘Be With You‘ which, to an acoustic guitar accompaniment, has Taylor singing “Nothing seems to be going right and that all right with me / Sure we’ve all had our battles / It works out eventually / We both know this is crazy / Tell me what to do / All I want to do is be with you“. Some might hear a touch of James Taylor here. Remarkably it’s a song that emerged in just a few minutes in a music and songwriting session at a Summer Camp for children living with and affected by cancer.

Sitting at the heart of the album ‘Ballad of the Young Troubadour‘ is directly autobiographical though, recounting Taylor’s earliest ventures into the world of music. Underage drinking in bars, train travel across the Northern USA, and the slow realisation that it took more than dreams of fame to achieve it: “turns out reality wasn’t cracked up to be what it was meant to be“. There’s no self-pity though, as Julian Taylor ventured out again a few years later with a band – but these were life shaping events “When in doubt I look back to when I was seventeen / and all those miles and miles and miles that I’ve seen / Each inch of pavement has a story to tell / some I can’t recall others I remember all too well.”  Heartfelt and honest, like a good song should be.

Album closer ‘Ola let’s Dance‘ is a stand-out, combining a spoken word recitation of a poem written by Taylor’s grandfather – a meditation full of positivity and an embracing of love – with an imagination of the moment his grandfather asked his wife to be to dance with him. It’s quite beautiful, and intense, it recalls one of Taylor’s musical heroes – Richie Havens – in its intent. The step from the poem, as Taylor concludes with “The life idea radiates this light / the bright star shines within / open your eyes let it be / effortless for you – and me“, to the urgency of the repeated “Ola won’t you come dance with me, won’t you dance with me, dance with me Ola, Ola” is made with aching pedal steel that is just perfection.

‘The Ridge‘ is a fine album, redolent of the best of the early singer-songwriter movement but with a strong voice – literally and figuratively – that makes it very much an album of today and right now. It also has the benefit of a talented group of backing musicians, with piano, fiddle and pedal steel provided by Derek Downham, Miranda Mullholland, and Burke Carroll respectively, whilst Taylor’s cousins Barry and Gene Diabo provide the bass and drums. Surely one of the best and purest Americana albums that’ll be coming out of Canada this year.

Julian Taylor delivers an album that borders on perfection.