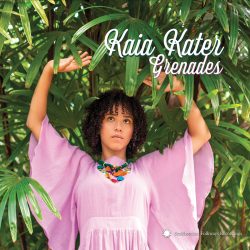 ‘Grenades,’ the excellent second record from Grenadian-Canadian Kaia Kater comes with an intriguing back story. The singer-songwriter decided to explore her father’s Grenadian roots and it sets an interesting platform upon which the record is built. Having fled to Canada following the US invasion of his home country in 1986, he recounts his experience on interludes throughout the record. These provide not only interesting context to his daughter’s lyrical content, but a damning indictment on US treatment of developing countries such as Grenada. His words are often hard-hitting, such as on ‘Death Of A Dream’ when he helplessly exclaims “to describe the invasion… it defies words”.

The primary focus, however, should not be taken away from the wonderful songwriting and musicianship on offer. The opening ‘New Colossus’ is a slice of breezy Americana, containing a chorus complete with exquisite harmonies. ‘Meridian Ground’ is the highlight of the record, carrying a completely laissez-faire melodic approach, yet still packs a major punch with its dreamy sonic demeanour and Kater’s urgent vocal delivery. The record ends with the atmospheric ‘Poets Be Buried’. Kater brings out the banjo as she takes a morose look to the next generation and the bleak state of affairs which her children will have to suffer.

On ‘Grenades,’  Kaia Kater does not refrain from bringing diversity to the fore, while still being able to include a healthy dosage of mainstream sensibilities. In this sense it is essential, somewhat akin to a modern-day ‘Graceland,’  albeit with a hell of a lot more authenticity and political fight. Kater has a knack of structuring her songs around strong choruses without losing any of the emotional impact that her lyrics deliver and perfectly conveys the horrific treatment her father suffered, as well as highlighting how little progress has been made since.