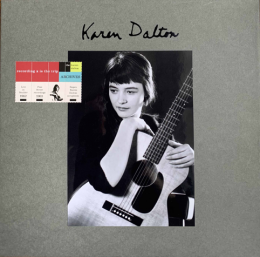 ‘Recording Is The Trip – The Karen Dalton Archives’ is a sumptuous box set that is currently retailing at £95 on Amazon. It includes two remastered albums across 3 CDs and the same albums issued for the first time on vinyl, a download of 13 unissued tracks plus a 56 page booklet which includes unpublished photographs and memorabilia and finally a recycled fabric t-shirt with a print of Karen Dalton’s own guitar tabs. All this for an artist who was largely unknown during her lifetime and who issued only two official albums in 1969 and 1971, neither of which are included on ‘Recording Is The Trip’, and who died of an AIDS-related illness in 1993.

In some respects Karen Dalton is the archetypical cult musician and it is difficult, if not impossible, to separate fact from fiction when reviewing her life, challenges and achievements, particularly as there are no known interviews with her.

and played the guitar like Jimmy Reed and went all the way with it” in Chronicles, Volume 1. Holy Modal Rounder, Pete Stampfel, who was in her backup band in the late ’60s and early ’70s, said that she made Janis Joplin sound like Betty Boop. Other fans included The Band whose ‘The Basement Tapes’ track ‘Katie’s Been Gone’ is rumoured to be about her. She became an influence and inspiration for a range of artists including Nick Cave, Lucinda Williams, Joanna Newsom and Devendra Banhat not just for her singing and instrumental skills but also for her determination to perform her music the way she wanted it to be heard despite disapproval and pressure from the music establishment.

Born July 19th 1937 in Bonham, Texas, to parents with Irish and Cherokee ancestry she was brought up in Enid, Oklahoma. From the outset when she moved to Greenwich Village in the early ’60s she was very different from the then current leaders of the folk revival. While she may have had the looks of a model with her dark hair and tall slim figure, she knew what it was like to be brought up in rural America. Unlike many young hopefuls she already had her own repertoire of folk, country and blues songs to play on her twelve-string guitar and long-necked banjo. By the time she was twenty-one she was divorced with two children, one of whom she brought to Greenwich Village. She very quickly established herself as an artist of rare talent with her blues-influenced singing and unique sense of time. Bob Dylan, Tim Hardin and Fred Neil worked with her at various times and she was viewed as an equal rather than simply a girl singer which was a new attitude at the time.

Despite such a promising start to her career as a folk singer she never achieved the success of her contemporaries. It is pure speculation as to why this was this case given her talent but the fact that she insisted on playing her music the way she wanted to and her refusal to put on any form of stage persona that would help sell her to a wider audience clearly had an impact. While heavy drinking and hard drugs affected her ability in the ’70s, at this point in her career she was only a moderate drinker and used nothing stronger than marijuana and LSD like many of her contemporaries.

In 1963 she decided to leave New York and head to Boulder, Colorado, as she felt city life and the quality of schooling in New York was not in the best interests of her daughter. By this time she had married fellow folkie Richard Tucker who accompanied her to Colorado to live in a remote miner’s cabin. During her time there she enjoyed horse riding, exploring the countryside and playing her music, particularly with friends from New York who occasionally dropped by. Boulder, Colorado, was well known to working folk musicians in the early ’60s as it was on the route between the East and West Coasts. Karen struck up a friendship with Joe Loop who ran the Attic Folk Club for a couple of years up to early 1963. Regular performers at his club included Tim Hardin, David Crosby and John Phillips, of the Mamas and Papas, and the recordings on ‘The Recording Is The Trip’ are from Joe Loop’s personal collection.

Karen eventually returned to New York to re-start her career in 1969 securing a record deal with friend and supporter Fred Neil’s label Capitol. The resulting album, ‘It’s So Hard To Tell Who’s Going To Love You The Best’ was excellent with a mix of acoustic and some electric instrumentation covering an eclectic range of covers. It would be been groundbreaking if it had been released five years earlier but it failed to sell, at which point Capitol let Karen go. The recording of this album has also added to her cult status in that it is rumoured that the issued takes were recorded without Karen’s knowledge that the tapes were rolling.

She recorded her last and greatest album ‘In My Own Time’ in 1971 at Bearsville Studios in Woodstock, which again included an eclectic range of covers but with more electric instrumentation, and again, despite its overall excellence, didn’t sell. After a European tour supporting Santana, Karen fell into obscurity and hard drug and alcohol dependency. Later in life she was again friendly with Peter Walker, iconic folk guitarist, who visited her regularly. She finally died in her sleep in her trailer home in the countryside outside Woodstock on March 19th 1993.

With the paucity of official recordings, the music included on ‘Recording Is The Trip’ takes on an enhanced significance. French record label Megaphone had released Karen’s debut album in the late ’90s and in 2005 they acquired Joe Loop’s Karen Dalton archive.  They immediately re-issued Karen’s debut album but with a long lost performance included on DVD and in 2007 they issued ‘Cotton Eyed Joe’ a two-disc set of a 1962 Karen Dalton performance recorded at The Attic on reel to reel tape. In 2008 ‘Green Rocky Road’ was released as a single disc of private two-track recordings made in 1963 in Pine Street, Boulder, Colorado. It is these two recordings that are included on ‘The Recording Is The Trip’, with the unreleased download tracks coming from another private recording of the same vintage.

Some commentators have said that Karen Dalton was a hesitant and sometimes reluctant performer. Listening to the 1962 performance of Karen accompanying herself on twelve-string guitar and long neck banjo you wonder where these ideas have come from. The performance is so real, personal and idiosyncratic that the first time you hear the songs it is jaw-dropping. Her vocals are taken at a very slow pace and are more spoken than sung and this allows Karen Dalton to take the songs wherever she feels like, which is much more akin to what a jazz musician does than a simple folk singer. The performance

starts with Ray Charles’ ‘It’s Alright’ and you know you are hearing something special. ‘Cotton Eyed Joe’,  the old fiddle tune, is given a complete makeover and is one of many standout individual tracks. Fred Neil was very supportive of Karen’s career in the ’60s and she delivers an excellent version of his ‘Blues On The Ceiling’. The old traditional ‘Katie Cruel’ is regarded as Karen’s signature song and was officially released on her second album and is one of Nick Cave’s favourite ever tracks. In this version it just drips with pure blues feeling.

The recordings on the third disc of ‘Recording Is The Trip’, originally released as ‘Green Rocky Road‘, are different in that they were home-recorded on two-track tape with Karen as engineer, producer and overdubbing herself. There is also a track, ‘In The Evening’, that includes Joe Loop on drums and Richard Tucker on guitar. Clearly these recordings were originally intended for Karen’s own pleasure and show her working out arrangements and approaches. The personal nature of these tracks is emphasised by the fact that Karen has a conversation with her mother at the start of ‘In The Evening’. There are only two tracks that appear on the 1962 live performance, ‘Katie Cruel’, including a telephone ringing in the background, and ‘In The Evening’. The difference between the versions is evidence that Karen Dalton took radically different approaches to songs as the mood took her and that she didn’t have a view of any definitive arrangement. While this may not be quite as compelling a listen as the live performance, the fact that the disc includes new songs means it is still an essential listen.

The 13 previously unreleased download tracks are similar to those on Disc 3 but with more of a group sound with Joe Loop on drums, husband Richard Tucker now on saxophone and Ray Chatfield on banjo. These recordings give some glimpses of the real Karen Dalton as she engages with the other musicians but the fact that she is playing with others also constrains her own performances. The standout track is her take on Billie Holiday’s ‘God Bless The Child’.

All these recordings show that Karen Dalton had a very singular view of how she wanted to perform the songs and it had little to do with the folk sounds of the Kingston Trio or the perfection of Joan Baez’s singing voice. She was able to go back to the early blues of the Mississippi delta, the Appalachian music of the Carter Family and the Jazz of Billie Holiday and make her own versions sound real not just facsimiles. She could also apply her gifts to the contemporary songs of her Greenwich Village peers. It was her realness that probably prevented her from developing a mainstream career like some of her contemporaries and the fact that though she wrote songs she never played her own compositions live or recorded them.

The music on ’The Recording Is The Trip’ and the overall packaging makes it a very special product and as such very difficult to grade, particularly as the music was never meant for commercial release. However, it is some of the best music of its time and genre and provides a fuller picture of a very unique artist so in that sense it is invaluable. At such a high retail price this is probably not the place to start your Karen Dalton collection, better to pick up her two official albums that are available for streaming and download, but if you have already been bitten by the Karen Dalton bug then this package will be very hard to resist.

0 thoughts on “Karen Dalton “The Recording Is The Trip – The Karen Dalton Archives” (Megaphone, 2020)”