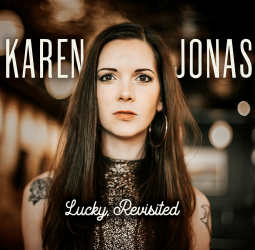 “Hang on to your hats boys”… and so begins the first bit of advice from Karen Jonas at the start of ‘Ophelia’ the first song on ‘Lucky, Revisited’. It would be well to take heed because what follows is a rip-roaring hoe down played with the sort of gusto any thrash-metal band would be proud of. But instead of de-tuned distortion imagine Albert Lee circa ‘Country Boy’ backing the hollering lungs of Maria Mckee. The song offers guidance (Jonas’ second piece of advice on the album) to one of Shakespeare’s ‘you fell for a wrong’ un girl’ characters: Ophelia + Hamlet with enough fervour to make the bard’s quill quiver. The question to Ophelia “But honey, didn’t you read Romeo and Juliet?” is smart, funny and indicative of Jonas’ writing quality.

It is a breathless start, and I guess it was intended to be. The story is that Jonas was working the post gig merch table, chatting with fans and so on, and concluded that her recorded albums just did not represent her live sound. As a result ‘Lucky, Revisited’ is her fourth album, but is actually a re-working of nine songs that appear across her first three records, plus two cover versions. What we get are songs that have grown; the children are honed, fit and at the top of their game, they turn heads and invite ‘goodness haven’t they got big’ comments. The sharpness springs from intense repetitions at gig after gig over half a decade. Compare Ophelia here to the version on 2016’s ‘Country Songs’ and you can calibrate the change in intensity. The original is good, but the ‘Lucky, Revisited’ album version lifts it to a new level. Credit must go to Jonas for having the courage to re-present her work. Credit too to Tim Bray for his blistering guitar work. But praise must also go to E.P Jackson bassist and engineer for this record. It is his approach to the recording that must have had Jonas chirruping that this was exactly the sound in her mind’s eye. This is engineer as doctor – ‘do no harm’ – laissez-faire in the sense that the sound needs little interference. It speaks for itself, loudly and energetically.

Jonas herself has said that she isn’t over enamoured with the country label. Is calling one of your albums ‘Country Songs’ then an error? Gathering a range of songs from previous albums displays Jonas’ breadth of writing and why country is a good home. Without doubt there is a heavy vein of country in the music and lyrical content. ‘Oklahoma Lottery’ is a Grapes of Wrath style chronicle of having to “Pack up your old jalopy because ‘You got some friends who say they’re workin’ out in California”. It is a fine song with another outstanding vocal performance. ‘Butter’ is the tale of (near) domestic heaven: “Mama cooks with butter/Course she does, sugar/ Soft and warm right on the counter/She looks like Grace Kelly/She tastes like Betty Crocker/Mama cooks with butter”. Ah yes, but she drinks straight whiskey.
So here we find the divining rod that leads to the heart of country, to the immutable music and message. On ‘Country Songs’ Jonas maps her journey “So thank you for teachin’ me to love country songs/ For makin’ me so sad I wanna sing along/When I hear that fiddle start, I can dance all over my broken heart/And I hardly care that you don’t love me like you used to do/No, I hardly care that you don’t love me like you used to do”.

In that context, the two covers Hank’s “Lovesick Blues” and Dylan’s “It Take A Lot To Laugh, It Takes A Train To Cry” make perfect sense. And, the re-recording of these songs makes perfect sense too. This is an excellent introduction to Jonas work. Hang on to your hats? For sure, but it is also hats off to a job very well done.