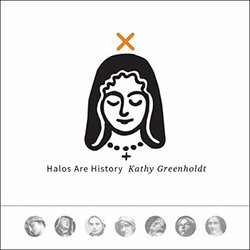 If much of modern popular music seems to span an almost infinitesimal range of genres and sub-genres then it’s still fair to say that the category of singer/songwriters dedicated to people who went on to become Catholic saints is still a relatively uncrowded one.

And devoted is the key watchword here given that Kathy Greenholdt’s is a religiously inspired combined CD and web-based historical project dedicated to humans canonised after their deaths. Chicago-based Greenholdt’s latest offering is a follow up to her previous record, ‘The Pilgrim,’ another seven track  album which was inspired by her travels to Spain, Italy and France and included a pilgrimage to explore the lives of other saints – on that occasion Ignatius of Loyola and Teresa of Avila – plus a later visit to scatter the ashes of her sister.

While ‘Halos Are History’ is mainly straight ahead sounding folk music with acoustic guitar allied to Greenholdt’s pure sounding, occasional keening vocal, there’s some nice use of trumpet to accompany the guitar on ‘Prayer to Saint Therese of Lisieux.’

The song on the album which is probably most successful sounding is the one which outwardly has the most temporal sounding lyrics, ‘Edie’:

“Edie, take my hand.
Give me one fast dance
’fore the midnight train
takes you straight into his arms.”

Meanwhile, a dedication to Hildegard von Bingen titled ‘The Living Light’ includes a wobbly, flying saucer-like effect, not dissimilar in its sound to the one on Hawkwind’s ‘Silver Machine.’

While the stories of Kathy Greenholdt’s favourite saints and their lives are intended to act as lessons for all mortals, ultimately the subject matter of this album is likely to prove too recondite for anyone who doesn’t have a particular interest in the subject matter, but with only seven songs on the record, at least its brevity means it doesn’t long outstay its welcome.