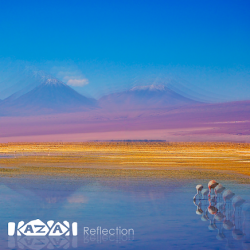 Kazyak songwriter/guitarist Peter Frey describes their newest release, “Reflection” as “an attempt to create surreal, vivid, Dali-esque images with our sound — it’s a collection of outtakes, demos, and b-sides consistent with our history of not-trying-to-be-mainstream alternative rock”. It’s the second part of that sentence that’s at the core of the problem with this recording – “a collection of outtakes, demos and b-sides” and, unfortunately, it sounds like it!

This is the band’s third recording and their first full-length offering so you might have expected them to be more concerned with getting it right, but it sounds scrappy and ill thought through. Why would you not want to put out your best material on your first full length release?! Of course, they may be attempting an ironic statement but some of this material really does sound like outtakes and b-sides. It all sounds a little dilettante in its delivery and its hard to find solid ideas to hang on to. The band aren’t bad musically and frequently deliver some interesting passages of music, but then someone decides to wander off track and it starts to sound like they’re all playing very slightly different songs. Kazyak obviously want to take a left- field approach to their recordings and see themselves as creative pioneers – and while it’s laudable to try to operate outside the box – a lot of this recording sounds half finished.

There are some very good ideas in here. Tracks like ‘Talking to a Stranger’, with its changing tempo and phased chord patterns and album opener ‘First Do No Harm’ with its stop-start staccato passages and lilting harmonies that are, at times, reminiscent of Fleet Foxes. But a lot of the ideas seem to fizzle out without really resolving themselves.

Reading about the band on their own website it appears that, for much of their time as a band, they’ve been a studio and recording concept and it’s only in recent months that they’ve started to take their music out to live audiences. It’ll be interesting to see how this informs and changes their sound. Listening to this album you do feel that the band need to connect more with their audience, whoever they may be, and working live can only help to achieve this.

What is refreshing is to hear some different musical approaches, particularly their use of nylon strung guitar that brings a warmth and depth to some of these songs that a more traditional guitar sound wouldn’t have offered. They also do some clever percussion work, mixing a live drum sound with sequenced drum patterns – but, ultimately, the album comes across as one of experimentation rather than finished recordings.

Like the mirage shown on the cover of this new album, Kazyak’s songs are very difficult to get to grips with. Just when you think you’ve got a song worked out it takes a lurch away and you find yourself clutching at the remains of a musical idea. Reading about the band’s philosophy and approach to their recordings this all makes sense but it becomes very wearing over the course of an album. Hopefully, taking these songs out to a live setting will give this band the opportunity to drop some of the experimentation and focus on the better ideas that exist in some well constructed but strangely elusive songs.

Some good ideas but, ultimately, too much experimentation