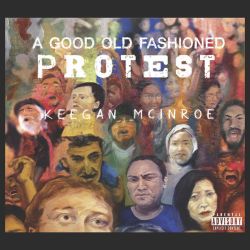 Protest songs are funny things. On the one hand they’re essential: the voice of the voiceless, musicians prepared to stand on stage and call out the evils of the world, large and small. On the other they tend to preach solely to the converted, are frequently simplistic and equally frequently are just shouty statements of the obvious designed to allow both performer and audience to bask in their self-righteousness.

Texas man Keegan McInroe falls somewhere between the two extremes. Saying your album is ‘a protest against war’ (inter alia) doesn’t start things off well and the opening Talking Talking Head Blues is scattergun and obvious and Bombing For Peace ineffective. But the more oblique (and therefore more powerful) Big Old River broods effectively and the thoughtful Christmas 1914, which takes the famous between trenches football game as a starting point for a powerful anti-war song is excellent. And this is very much the pattern of the album, which is an archetypal curate’s egg. The Ballad Of Timmy Johnson’s Living Brother liberally borrows its melody from Me And Bobby McGee but the following spoken word Nietzsche Wore Boots really hits home.

Given that the album is available track by track on a name your price basis on McInroe’s website that would seem the way to go.