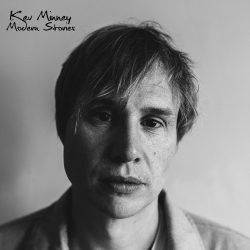 Kev Minney is a 37 year-old guitarist and singer-songwriter born in Northampton and now based in Brighton. He spent the early part of his musical career as a guitarist and in 2015 started his singer-songwriter career with an EP recorded in New York followed by his first full album ‘Stories Of The Sky’ in 2017. His songs have had 250,000 streams and have received airplay on various national and local radio stations. ‘Modern Stories’ is his independently released Arts Council funded difficult second album that was written and recorded in Brighton.

Categorisation of music can prove difficult and alt-folk is the tag that is currently applied to Kev Minney. His stated major influences are Joni Mitchell, John Martyn, Nick Drake, REM and Radiohead. To these ears Nick Drake’s ‘Five Leaves Left’ appears to be a prime influence with Kev Minney’s acoustic guitar prominent against the orchestral arrangements of Brighton based musician and arranger Andrew Stuart-Buttle.

‘Modern Stories’ is a retro sounding album that deals with modern day issues such as technology, addiction and mental health. The album contains 10 short songs with a total running time of 31 minutes. It is clear that Kev Minney has put a lot of thought into the songs and the production by Jag Jago allows the music to breath and is not too highly polished. Steph Brown, Kev Minney’s partner, contributes two co-writes and is featured on BVs and piano.

Five singles have been trailed from ‘Modern Stories’ in an attempt to really build demand for the full album. The lead track ‘Magic’ was the third single and is a contemplation on belief with jazzy guitar and rich orchestration and is a strong opener. ‘Stronger’ features Steph Brown’s piano and is a wispy gentle track. Mention ‘Man Of Steel’ to almost anyone and they will think you are referring to Superman but this track is about the experience of a friend whose accident resulted in his skull being rebuilt with steel plates. ‘God Is An Algorithm’ is inspired by Prof. Yuval Noah Harari’s book ‘Homo Deus: A Brief History of Tomorrow’ which highlights the challenges caused by genetics, AI and robotics and features cleanly picked guitar, layered vocals and sweeping orchestration. In contrast, ‘A Way Out’ is more of a band track with electric guitar featured alongside Kev Minney’s acoustic licks with splashes of mandocello. ‘Borrow More’ is a co-write with Steph Brown and is the current single which has attracted some radio play. The benefits of friendship is the simple message of ‘Good Friends’. The second co-write with Steph Brown is ‘Natural Disaster’ which also features her duet vocals. The effect of a relationship on one’s emotions is the subject of ‘Feeling Fine’ and the album closes with an emotional ‘All That I Need’.

‘Modern Stories’ shows a development from Kev Minney’s debut album. It could be seen as a microcosm of the modern music industry in that it is  well written, well performed and well produced and was made without the involvement of a record label. Unfortunately, it will very likely struggle to be heard by a significant portion of its potential audience due to the sheer volume of similar music available and the fact that, despite the use of social and digital media,  independent artists can struggle to build a wider audience without a record company supported marketing campaign.

About Martin Johnson 87 Articles
I've been a music obsessive for more years than I care to admit to. Part of my enjoyment from music comes from discovering new sounds and artists while continuing to explore the roots of American 20th century music that has impacted the whole of world culture.

What is Americana? – Lady Neade and Carmen Phelan

There must be something in the air in LA, well maybe not in downtown LA but somewhere in LA, which once breathed in inspires the most delicate examples of folk song to be written.  Admittedly […]

Here is an absorbing new song from The Weather Station, the project of Tamara Lindeman.  The narrator of ‘Atlantic’ is on the edge of a cliff, watching a sunset that is at once both terrifying […]