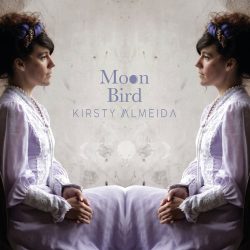 This is quite a lovely record. Gibraltarian singer/songwriter Kirsty Almeida has crafted some very interesting songs for this, her first studio album in nearly six years (since 2014’s ‘Dejavoodu’). She had taken a creative sabbatical following the birth of her son, but this album sees her return with songs based on some of her experiences over the past few years, including her battle with post natal depression.

While some of the songs may have some dark moments it’s the positivity of the album that really strikes home. This artist has a voice that simply sounds upbeat on everything she does – even a song like ‘The Stranger’, with its slightly spooky arrangement and ethereal backing vocals still exudes positivity.

This is quite an eclectic album. In many ways its “Americanas” music, rather than Americana, as there is a strong Latin influence on several of the tracks. This is particularly true of the title track, ‘Moonbird’, with its layered vocals and nylon-stringed guitar constantly in the background. It’s a very atmospheric track but, for all the elaborate dressing around the arrangement there’s quite a simple song at its heart. This seems to be true of all Kirsty Almeida’s songs – she keeps them simple in terms of lyrics and basic melody but the arrangements and delivery of these songs is highly creative and there are plenty of surprises on this album. Just when you think you’ve worked her out and have identified all the little South American influences, she throws you a complete curve ball with a track like ‘Step into the Light’ that sounds distinctly North African, courtesy of the main instrument being a Kora that is beautifully played by John Haycock. In fact, all the musicians who worked with Almeida on this record deserve to be recognised; the musicianship really is of the highest calibre.

Listening to the songs on this album you can hear that Almeida draws heavily on personal experience and nowhere is this more obvious than on one of the highlights of the album, for this reviewer, a track called ‘Josie Brown’. It’s a story of a young girl befriending an elderly neighbour and it’s such a tender and heartfelt song that it has to come from personal experience “I had to knock, a special knock, so not to give old Jose a shock and she’d peak at me through the letter hole. She’d say “My, how you’ve grown, the week must have flown”. Dear old Josie Brown”. Rumour has it that, when award-winning songwriter Guy Chambers heard this song, he immediately sought out Kirsty Almeida to ask her to write with him.

There are a number of songs on the album that are about love in its many forms – new love, fading love, a mother’s love – but one of the most interesting is album closer ‘Ode to a Parlour Guitar’. There are no lyrics, just a sung melody but it is such a pretty tune that there’s no doubting how much she cares for her parlour guitar, which can be clearly heard at the start of the track.

This is an album that will keep on giving. Every time you listen to it you hear something new. Kirsty Almeida is a very clever and creative songwriter and this is a truly fascinating collection of songs.

A collection of beautifully realised songs from a very creative songwriter