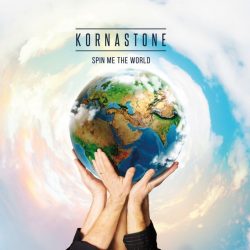 ‘Spin Me The World‘ is the latest release from the Wolverhampton -based five-piece band Kornastone, following their debut album ‘Oh My Days’ released in  2018 and ‘Beautiful Day’ EP released last year.  The band is headed up by singer/songwriters Dave Lawrence & James Davey, collaborators since the late 1970’s, after an early band project writing songs and performing as a duo, often joining other artists on tour such as Raymond Froggatt. The other band members are Stuart Ward, Martin Ratcliffe and Keith Allen, with production by Gavin Monaghan.

‘Spin Me The World‘ clearly shows these 1970’s roots, with well-crafted songs characterized by strong and memorable choruses, and guitar-led arrangements with influences from country rock, folk-rock and occasionally prog rock, with some Americana leanings in nods to Crosby Stills and Nash, in the simple but effective harmonies employed throughout. The strongest echoes are perhaps from British bands of the 1970’s, such as Ace and Dire Straits, and Nottingham favourites Plummet Airlines. Not a bad thing–the original songs are delivered with aplomb and integrity, never slipping into pastiche.

Fine lead guitar is prominent on each of the tracks, with one or more solos  on each song, sometimes with twin leads/double-tracked, providing a consistent thread through the EP, along with the gentle lead vocals, where the folk/prog rock leanings are strongest. Opening track ‘Sad Cliche’ sets the tone for the EP, with acoustic guitar intro, and those gentle vocals, singing “Who will you tell/what would you say/’cause its all just a sad/a sad cliche”.  ‘Swallow’, with fiddle joining the instrumentation has the strongest folk rock leaning, musing on the life and thoughts of the bird returning for the summer, “I’d like to know/ what you’re thinking/and if you’re trying to say /something to me”. Making the strongest impression is the EP closer, ‘Carousel’,  with the rousing chorus “Everybody’s got a story to tell/or maybe something on their mind/like a ride on a carousel/spinning around one more time”.

Perhaps the main criticism of the album is that lyrically there is a leaning to a rather cliched approach to the writing, and an absence of the storytelling or emotional content at the core of much of the best of the Americana realm, but this does not detract from the overall feel of the album. An enjoyable listen, especially for lovers of an authentic 70’s vibe.