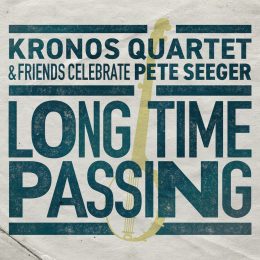 This is an excellent recording that manages to celebrate and capture the essence of Pete Seeger the man, not just Pete Seeger the musician, while enhancing the already impressive reputation of the Kronos Quartet. While Pete Seeger’s name is well known in the folk and roots music world it is sometimes forgotten just how groundbreaking his work was as a musician and that he was a prime mover in forging a link between folk music and radical politics. He was born in 1919 to parents who were classical musicians. His father, Charles Seeger, held various roles under Roosevelt’s New Deal initiatives in the 1930s, and it was while accompanying his father on a field trip that he heard first-hand and for the first time the music of the banjo in North Carolina. His education continued when he sometimes attended loft parties in Greenwich Village held by painter and art teacher Thomas Hart Benton with his father and stepmother. Benton’s wife was a lover of early americana songs which were often played by the artists and musicians who attend including Charles and Jackson Pollock, avant-garde composers Carl Ruggles and Henry Cowell. Seeger joined the Communist Party in 1937 and was blacklisted in the witch-hunts of the 1950s under McCarthyism. From these beginnings Seeger went on to build a career as a performer, activist and educator who was responsible for the finding and writing of many songs that have now become folk standards including ‘Turn, Turn, Turn’,  ‘We Shall Overcome’, ‘If I Had A Hammer’, ‘Where Have All The Flowers Gone’ and ‘Kisses Sweeter Than Wine’. The familiarity of those songs should not undermine their greatness which is always the danger when the original context gets forgotten.

The Kronos Quartet are an ostensibly classical string quartet from San Francisco who over their 40 plus year career have recorded everything from the works of modern classical composers to covers of Jimi Hendrix, Television and Bob Dylan with over 900 works being written for them. Leader and violinist David Harrington says that the Quartet operates as a single instrument and their stringed instruments allow them to adapt to music from various genres and cultures.  ‘Long Time Passing: Kronos Quartet & Friends Celebrate Pete Seeger’ features Sam Amidon, Maria Arnal, Brian Carpenter, Nikky Finney, Lee Knight, Meklit and Aoife O’Donovan and could be considered a follow-up to 2018’s ‘Folk Songs’ which also included performances from Sam Amidon and traditional English songs.

The Kronos Quartet are nothing if they are not musical disrupters and they manage to create a complete picture of Pete Seeger. The album starts with ‘Which Side Are You On’, originally about a strike at a Harlan County, Kentucky, coal mine but given modern relevance by singer Lee Knight. The flamenco number ‘Anda Jaleo’ and the Spanish Civil War anthem ‘Jarama Valley’ celebrate Seeger’s early adoption of anti-fascism and his friendship with Woody Guthrie. Pete Seeger was not only a folk singer but also a populariser of world music as shown by the South Asian raga ‘early adoption of anti-fascism Raghav Raja Ram’ and South African song  ‘Mbube’, better known as the basis for ‘The Lion Sleeps Tonight’.  A highlight of the album is the new song ‘Story Teller’ which is stitched together from clips of Pete Seeger’s spoken words with new music by Kronos Quartet acolyte Jacob Garchik. This brings back to life Pete Seeger’s fondly remembered live radio and television shows. Pete Seeger will also be remembered as the author of the Byrds ‘Turn, Turn, Turn’ when he added music to verses from the Bible’s Book of Ecclesiastes. The song was covered by Seeger himself, Judy Collins and Nina Simone. David Harrington asked arranger Jacob Garchik to meld all these versions into the Kronos Quartets arrangement included here.

There we have it. This is a heartfelt celebration of Pete Seeger that manages to reflect the essence of the various facets of the man, activist, folk musician, songwriter, educator and media presenter. It also manages to make some of the most familiar songs of the mid-twentieth century relevant again given the challenges we face in the twenty-first century. The Kronos Quartet again shows how adaptable they are as a musical unit and how no genre can effectively contain them. This album will be making my best of year list.