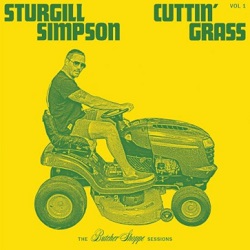 Sturgill Simpson is a man in a hurry. Having established a reputation as a distinctive voice tackling those Cosmic issues in his own way, with albums such as ‘Metamodern Sounds in Country Music‘ and ‘A Sailor’s Guide to Earth‘, he took a quick ‘Trans‘ shaped excursion with his last album ‘Sound & Fury‘ which brought in a rockier sound – and many synthesizers – and an accompanying anime film. Clearly not one to sit on his laurels, or to do the predictable thing, the new album ‘Cuttin; Grass Vol 1‘ is a double LP sized serving of his native Kentucky’s traditional bluegrass.  It’s not an obvious move, but one that is likely to cause less furore than accompanied the appearance of ‘Sound & Fury‘.

‘Cuttin’ Grass‘ can truthfully be described as a fever dream – Sturgill Simpson was at home recovering from Coronavirus when the idea for the
album struck him.  Assembling an acoustic band from Nashville’s finest , Simpson had one further twist to add – the album contains no standards, and no covers of other artists.  Instead ‘Cuttin’ Grass‘  has twenty reimaginings  of songs from Simpson’s first three albums – nothing slipped through from ‘Sound & Fury’.   As Sturgill Simpson contributes rhythm guitar and, of course, lead vocals the heavy lifting in the musical prowess stakes comes from Sierra Hull (mandolin), Stuart Duncan (fiddle) Mark Howard (lead guitar) and Scott Vestal (banjo) with Mike Bub, Tim O’Brien, and Miles Miller adding the rhythm.  The reshaped songs work perfectly – not only do they easily take the conversion from semi-outlaw country and glintings of Cosmic American Music they actually go further.  It’s as if they were meant to be bluegrass songs all along.

There’s a slight irony to the already heavily ironic ‘Life Ain’t Fair and the World is Mean‘: opening with a beautifully enunciated “Well that label man said son now can you sing a little bit more clear” it’s then carried forward on some solid guitar and banjo backing as Sturgill Simpson adds “can you sing a little bit more about outlaws and the way things used to be?”  Seems so.  ‘Old King Coal‘ is as traditional a fiddle and banjo song as you could wish for, and the lyrics of the end of black lung and coal mining sound like they’ve been drawn straight from the nineteen-forties.  ‘The Storm‘ is at least double the speed,  the portentous original becoming an insistent adrenalin rush.  Even the science-fiction conspiracy secular Cosmic American ballad ‘Turtles all the Way Down‘ is more than intact in bluegrass form.

Whether the tag ‘Vol 1‘ is a true statement of intent or just a jocular tease is really immaterial ‘cos it’d be fine to have more like ‘Cuttin’ Grass‘,
and it’d also be fine if Sturgill Simpson’s restless muse takes him on to other things. We have, perhaps, become too used to our bands cutting a
musical path and then more or less sticking to it – but the artists that make a difference are those who shoulder the burden of a broader musicality. Sturgill Simpson is certainly making more than one track as he passes along.

Sturgill Simpson gets back to his roots