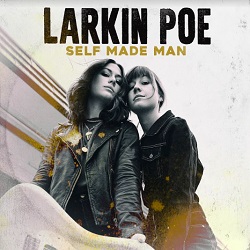 It’s bad news for anyone hoping that the Lovell sisters Rebecca and Megan will one-day revert to their bluegrass acoustic roots as ‘Self Made Man‘ firmly anchors their band Larkin Poe to their trademark glam-stomp heavy slide guitar rocking sound.  Although there are some aspects to the new record which are definitely backward looking, only it’s within the confines of that sound and its traditions and roots.  For rock has been with us now for some 50 years and rock and roll some 65 years or so, as Larkin Poe acknowledge with the tragically timely ‘Back Down South‘.

It’s a song that burns with competing fires, Megan Lovell’s slide guitar playing duelling with Tyler Bryant’s lead guitar whilst Rebecca Lovell growls and wails through a potted history of the roots of rock and roll as country blues gets a mighty injection of energy from Little Richard.  The sisters were clearly in a reflective mood as the follow on ‘Tears of Blue to Gold‘ imagines a youthful friendship with Elvis “I was a Pepsi-Cola factory man made my living with my own two hands that skinny kid moved up to Graceland back in the days gone by“.  There’s no envy though, as there are compensations to not becoming The King “we slept beneath our hopes and wishes, forty two years me and the missus.”  ‘Tears of Blue to Gold‘ is a gloriously joyful, hand-clapping memory of how it might have been.

There’s more fine story telling on ‘Ex-Con‘, a tale of youth gone bad who thinks that “the only crime was getting caught.”  Turns out that jail isn’t a lot of laughs, but there’s plenty of time to think “hallelujah let me introduce you to ex-con little old me“.  It’s a bluesy ride all the way back into momma’s good books.  No song rocks harder though than the opener ‘She’s a Self Made Man‘ which grinds out the meanest riffs of the album and unashamedly beats out a road breaking beat as Rebecca Lovell swaggers through a burst of self-promotion “like it or not I don’t give a damn, Lord have mercy I’m a self made man.”

Admittedly not so different from previous albums such as  ‘Kin‘ and ‘Venom & Faith’ , but when you’ve found your signature sound why abandon it?  No, just refine it.  Larkin Poe have, once more, demonstrated that they can rock with the best of them.

Don't you know, Rock and Roll is spelt Larkin Poe?