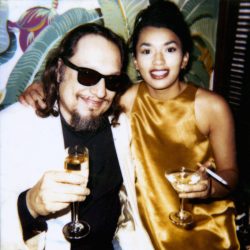 “Larry ‘Ratso’ Sloman is a Jewish New York author. Readers here might be familiar with his account of the 1975 Rolling Thunder Revue ‘On the Road with Bob Dylan.’ Sloman also wrote ‘Reefer Madness,’ a social history of the use of marijuana in the USA. He is a friend and collaborator with fellow Jewish writer and musician, Kinky Friedman. ‘Stubborn Heart’ is Sloman’s first album and one that he has wanted to make for a long time. He has previously co-written around thirty songs including work with John Cale and Rick Derringer. In addition, Sloman owns Ratso Music, his own music publishing company.

The album opens with ‘I Want Everything,’ Sloman delivering a slow-spoken vocal over an electronic backbeat. The track also features Lebanese songwriter and actress, Yasmine Hamdan, one of a number of guests to appear on the album. Next up is the album’s most memorable cut ‘Our Lady of the Light,’ a duet with Nick Cave. Sadly, there is little else to match it elsewhere on the album.

Most of the album has a highly produced synthesised, electronic accompaniment. The one exception is the Dylanesque ‘Matching Scars,’ which features brushed drums, guitar, organ and pedal steel. It’s a bit of an acoustic oasis, more likely to appeal to AUK readers than most of the other tracks.

Vocally, Sloman switches between a spoken style, reminiscent of his late friend Leonard Cohen and the raspy singing style of Bob Dylan. Neither are particularly convincing; both sound rather contrived. The spoken tracks in particular are laboured and occasionally risk veering into Telly Savalas territory.

Larry Sloman is a great writer. During his career he has also had a shot at acting. With this album he turns his hand to music. The result is clever and artistic, but lacks any kind of warmth, soul or emotion. It’s hard to see it as anything else other than a vanity project. Hopefully his follow-up will be a book.