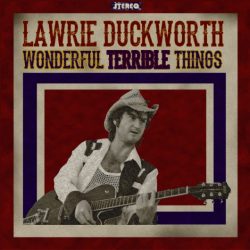 Lawrie Duckworth debuts his ‘Wonderful Terrible Things’ as an eccentric purveyor of unashamedly dated, swashbuckling yarns, delivered with a blend of the Kinks breezy Albion, alongside hints of the type of foreboding Americana found on non-PC acts such as Gandalf Murphy and the Slambovian Theatre of Dreams. The dark satire throughout is as obvious as the metaphorical allusion, that is to say, nothing is as it seems.

At least, that is the case for a large part of the album. Duckworth’s opening salvos ‘The Ballad Of Captain Cook’, ‘The Devil In Me’ and ‘Drink To The Sun’ are an illustration of the artist’s more flamboyant side – be that the epic dialogue of Captain Cook’s arrival at Hawaii complete with ‘Aloha’ chorus and Honolulu slide guitar effects, to the tortured soul who finds himself begging forgiveness for the “wonderful, terrible things”, or the party animal who is content to raise a glass to the sun (or anything else) – but you won’t find him worshipping a ball of hydrogen. These tracks show flair and a talent for original songwriting and solid musicianship but explore a little deeper and there is perhaps another, less glib quality to be found.

The second half of the album sees a toning down of the droll escapism in favour of a window into the man himself. ‘Carried Away’ is a melancholy melody, focused on the near loss of a loved one;  the narrative has come around full circle from the devil-may-care protagonist of the “Adieu je romps avec vous” that came before. Musically, Duckworth keeps the faith as the album progresses. The Beatles’ ‘Honey Pie’ type foot-tapping tunes are done with panache, interspersed with acoustic finger-pickers. But lyrically this is a journey. ‘Glory’ speaks of friends and family, of finding your way, while ‘Things We Didn’t See’ conjures dark images on which the listener can only speculate.

Lawrie Duckworth is a complex character: you’ll laugh, cry and everything in-between during a spin of ‘Wonderful Terrible Things’. More straightforward is the fact that you’ll keep humming along and tapping your feet to some excellent alternative music. From Delhi to New Orleans and back to Bath, Somerset, here is a troubadour for our times.

Wonderful? Terrible? Nothing is as it seems on this confusing, hilarious, introspective debut.