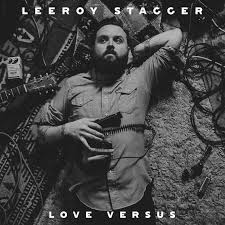 Stagger’s eleventh studio album sees him really hitting some impressive heights as a songwriter. This is an old school album in the sense that it is a singer/songwriter opening his heart and reflecting his concerns and dreams whilst backed by an accomplished bunch of musicians and highly sympathetic production.
Each song is crisp and independent but they all build to give an affecting picture of an artist comfortable in his own skin and in charge of his craft.

Songs such as ‘Crooked Old World’ and the title ‘Love Versus’ are classic verse, verse, chorus etc etc but they are so well done that the choruses become intuitive after a couple of plays and the depth of the production quickly comes to the fore as colours of guitar or harmonies draw the listener further into the narrative.

Instrumentation speaks of Americana – lots of guitars wooden or otherwise, strong accented voice, country colours, some Hammond etc. etc. but these are essentially pop songs; bright of melody and beautifully constructed. Even the melancholic narrative of ‘Run Rabbit Run’ whilst exploring the classic tropes of the genre still have a pop sensibility that should see Stagger regarded more and more as songwriter as well as a performer.

If a touchstone is needed then Ryan Adams it must be and given the choice, this album is stronger than Ryan’s last one!