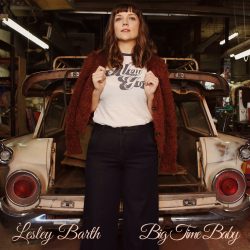 ‘Big Time Baby’ is about the importance of realising who you are and being that person. Lesley Barth tells her own story with sincerity and a lightness in the style of Joni Mitchell or Carole King. Alarmed by how much she was conforming to the accepted obsession with achievement Barth decided she had to change. “You can’t perform and live life at the same time” she admits so out went the corporate job to concentrate on music. As Barth confronts this stranger she has become she connects with her real self while offering the listener opportunity to do likewise.

‘Lower East Side’ is a statement of the album’s intention. “I’m not ready for the big time, baby” is not an admission of defeat so much as purely rejecting the so-called big time. The confident pace of ‘Woman Looking Back at Me’ matches Barth’s desire to replace this self she no longer recognises with someone more authentic. ‘You Gotta Hand it to the Man’ discards the hierarchies that dominate much of life as Barth gets into her stride. The delicate singer-songwriter builds into a crescendo of self-belief. By contrast ‘Making Decisions’ has a soothing feel as if Barth is confirming to herself she is on the right track. The strings of ‘Something Good’ intensify her reflection with, “I wish I could let myself feel good about something good/ instead of wondering if I could be someone better”.

Barth crosses many genre boundaries from folk to pop although she sounds most at home with her gentle 1970s singer-songwriter sound. But should such change not come with a bit of passion? Not necessarily. As she demonstrates throughout ‘Big Time Baby’ Lesley Barth’s equilibrium adds greater heft to her renewal.