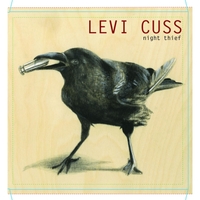 Who is Levi Cuss? If you listen to this record you might just find out, delving into a dark past and redemption through the salvation of music and poetry. Joining the thriving ”Canamericana’’ group of artists driving Americana music forward and out of a predominantly southern heritage, Levi has created an honest and raw record with no frills and dripped with gorgeous steel guitar wailing to accompany his laments, and great blues guitar to texture his more salacious background, not dissimilarly to Steve Earle in his Terraplane record.

Cut My Teeth is a tale of redemption, finding your way home through the dark. With a refrain with lines ‘’I just cut my teeth/ On the hands that feed me/ The bombs will land/ The bombs will land’’ accompanied by raw electric guitar and drums, this is a track with a dark atmosphere, describing how Levi would hold himself back, rebelling against the society who would always label him as bad and a government who would only teach him about punishment.

Pills is similarly dark telling the story of a girl abused by a father figure turning to drugs. This song is much more melancholy than Cut My Teeth, being dominated by a sorrowful steel guitar and gentle rhythm. It is beautiful in an understated way, with verses being almost spoken word, and a quiet chorus refrain of ‘’Pretty people, they take pills’’. The song is simplistic and haunting, very much complementing and kicking back against the more brash blues played in Cut My Teeth and Bringing It Back.

Tecumseh is one of my favourite tracks, again very dark, describing a scene of violence and the ensuing incarceration. The salvation in the song is the woman who the man is protecting, and who is sticking with him through the troubles described. The key lines in the song as ‘’There is no light without dark/ No love without spark’’ which is a great way to describe the whole record in a microcosm, and perhaps a shadowy self-portrait of Levi himself.

Tongues is another honest track grounded in pain and redemption, this time revolving around a relationship and exploring why a couple will cause each other pain. ‘’I don’t know why I always make her cry’’ is a recurrent line, and ‘’Touch of skin/ Like a razor wire’’ is incredibly emotive in conjuring the image of a toxic situation. ‘’The artist sucks the poison away’’ represents the redemption and catharsis that is found in poetry and music, helping to heal any wounds. The narrator is looking for an escape from the destructive cycle of pain, and redemption is found in expression.

Night Thief is a record I can highly recommend. It is raw, real and has some lines which can really cut through the music to stand out on their own. It reminds me a little of Steve Earle in the way that Levi’s husky vocals succeed where a lot of artists fail: in capturing the emotion of the words being conveyed. Like Steve Earle, he is also grounded in musical roots, whether that be in the blues, country or Americana. That is some praise to give, and well deserved it is.

An honest, raw record exploring the trials and tribulations of a hard life, and the redemption of coming out the other side.