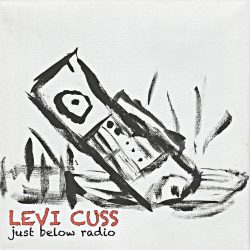 his offering is a double EP from Canadian Levi Cuss, a Steve Earle lookalike with similar attitude and style. Quite why the EP’s do not form a full album is not clear but whatever the reason these are two really good bluesy offerings. Both EP’s were recorded at the Henhouse Studios in Nashville owned by Steve Dawson a renowned Canadian artist and producer who has not only produced these records but also plays acoustic and electric guitars and pedal steel.

There is little difference between the CD’s although only volume one features organ which is played by here by Chris Gestrin which gives a great funky feel especially to the first track White Lies.

Cuss has written all eight tracks which are evenly distributed on these EP’s. The lyrics are raw and in some cases not for the faint-hearted with drug references and the like but hey this is music with attitude after all. Cuss spent some time in London a short while ago and Shoreditch High reflects his musings on his stay although the track could reference any bustling western city. Probably the best track on show is Blew It All Away, a break-up song full of angst with a catchy riff and fabulous steel guitar although all tracks are of rare quality showcasing a real talent. Cuss has previously released two full-length albums which are worth checking in addition to these EP’s.