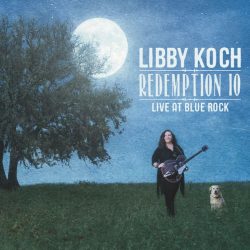 Libby Koch (rhymes with Coke), from Houston, Texas, now with an established reputation, wanted to celebrate the tenth anniversary of the recording of her first album, ‘Redemption.’ Ten years ago, it was Libby, a guitar and a fine album. Now, an established artist, she has gathered around her a group of musicians including Patterson Barrett, who co produced ‘Redemption 10’ with Libby and who plays piano, organ, pedal steel and mandolin, with other members of the band: Bill Browder, lead guitar; Eddie Cantu on drums; Javier Chaparro on violin; and Glenn Schuetz on bass. Together they have produced a live performance recorded at Blue Rock Artist Ranch and Studio, Wimberley, in central Texas hill country, south of Austin, an outstanding album!

‘Houston,’ the first track, sets the scene perfectly: “On a highway back to Houston/ I’ve bid farewell to Tennessee.” By way of a reference to Libby’s own family history, this is also a hint at the standing Texas is establishing for itself in Americana and Country music, alongside Tennessee. Listen to the bridge, here, for an affirmation of this, with the violin and steel guitar. And listen to the applause at the end with Libby’s thanks, “Thank you all!” There is a Texas feel there.

The second track continues and affirms this overall sense of Libby being at one with the music. Here is a simple straightforward love song: “Just the way I feel about you now.” The confident arrangement and presentation, with mouth harp in the background, carries the audience along easily.

The songs carry on in this way. ‘Can’t Complain’ is about life in general, and, despite everything, doing all right. “Life’s worth the living when you’re living for love” – with the final notes from the steel guitar at the end of the track and the cheers from the audience. Track 6, ‘How Long’ is interesting, as it is modelled on Psalm 40. “I have waited patiently” are the words in the psalm exactly, as are, “We’ll set our feet upon a place where we can stand” which mirror the psalm’s words: “and set my feet upon a rock/ making my steps secure.” Certainly, this latest version is just right, more up-tempo and bluegrassy, with yodelling, and fiddle at times. “How long,” Libby sings, “will we sing (and dance) to this song?” A stand out track!

‘Down’ is similarly a crowd-pleaser. Just listen to the band warming up, getting in tune at the start. Here is a singer in proper conversation both with her audience and with her band. Never has it sounded more appealing to go “Down, down down!” Notice, again, the bridge where you can enjoy pieces by violin, piano and guitar. As Abby sings at the end, “I’ll go down on my knees / cause all I think to do is play!”

‘I Still Miss Someone’ the last track, starts off by echoing how Libby sounded ten years ago. But now, with a group of standout musicians, we are treated to her grand development as a noted figure in this type of music. On this track, you can tell how good she was – and how great she is now.