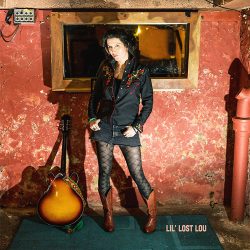 Lil’ Lost Lou may just have balanced out one of the most one sided stories in musical history. The Country/Rockabilly singer from Camden Town, aka Lou Psyche, has finally given voice to the eternal ‘other woman’, Jolene. I kIssed Your Man (Jolene) is as haunting a track as you will hear all year and one of a number of treasures on this debut album from this regular on the London Country/Punk scene. To record this album, Lou made a trip to Nashville to work with producer Billy Livsey, who has previously worked with the likes of Ronnie Lane and Kenny Rogers.

Enlisting a band of session musicians with a highly impressive pedigree she set about crafting a sound that combines the London attitude with the style of Nashville. If some of the punk edginess is taken away by slick production, it seems a fair trade as the finished article is certainly worth checking out.

There are a number of highlights, not least the rousing opener Boy From The City which tells the story of a city banker and his tempestuous affair with a girl from Camden Town. Ride a Train is al gospel-like beauty and Song For Bob Dylan is a song which has been written for twenty years and which apparently kick-started the recording session which saw the whole album nailed down in twelve hours.

Do yourself a favour, go out and find Lil’ Lost Lou as she doesn’t seem the sort to hang around.