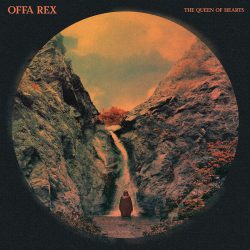 The lovely people at NPR Music have got a stream of the new album by Offa Rex, a side project from the Decemberists with English folk singer Olivia Chaney (no relation to Dick) (partly because they spell their surnames differently).  They say: “The Queen Of Hearts is the title of Offa Rex’s debut album, which features the musicians in The Decemberists backing up Chaney, who assumes lead vocalist duties. It’s a match made in folk-rock heaven. Like similar team-ups of yore — most notably the legendary pairing of The Albion Band and Shirley Collins in the early 1970s — Queen is an interpolation of vintage British Isles folk music as filtered through electric guitars and a sinewy rock backbeat. The result is both a tribute and translation, connecting the dots between contemporary indie music and a deeper cultural legacy.

The album draws heavily on the folk songbook, from the haunting drone of “The First Time Ever I Saw Your Face” to the jangly melancholy of “Bonnie May,” a timeless ode to a love gone off to war. Tragedy, romance and the rhythms of everyday life inform Queen’s exquisitely curated playlist. “Dark Eyed Sailor,” a Steeleye Span favorite in the ’70s, coasts on gently strummed chords and Chaney’s heart-piercing plea for fidelity. And on the disc’s sumptuous title track, a psychedelic energy suffuses the song’s otherwise primordial lilt.

Chaney takes gripping prominence on the album — her voice is an arresting, attention-demanding trill — but she doesn’t sing lead throughout. On “Blackleg Miner,” Meloy sings lead, breathing a tremulous righteousness into the song’s tale of the plight of striking coalminers in 19th-century England. Steeleye Span returned the song to prominence in 1970, and Offa Rex does justice to a classic ballad of injustice. And on “Constant Billy Eddington/I’ll Go Enlist Sherborne,” vocals are done away with entirely, leaving the ebullient jig to dance along on its own.

The Decemberists have long shown a fascination with the tragedy of folklore, and it was probably inevitable that they’d wind up making a traditional folk-rock album at some point in their careers. But by teaming with Chaney, they’ve surpassed delivering a mere homage. Instead, The Queen Of Hearts hums with the resonance of bygone eras and ancient ways, of doomed love and arduous hardship — all of it embroidered into the patchwork tapestry of life itself.”

You can listen to the whole record over at NPR Music, or whet your appetite with the track below.

About Mark Whitfield 1519 Articles
Mark Whitfield has been Editor of Americana UK for the last 20 years while also working in public health as his day job, which has been kind of busy recently.