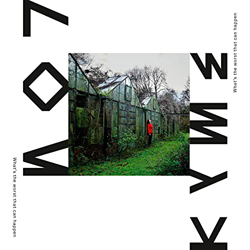 Formerly of the family based Southampton rockabilly band, The Okeh Wranglers, Lou Kyme emerges from the wilderness with an ace hidden up her sleeve. That ace is the presence of Vicente Rodriguez and James DePrato from Chuck Prophet’s Mission Express who back her on this seven-song album. Recorded in the Mission district of SF, Chuck himself slings some guitar on two of the songs while his missus, Stephanie Finch also makes an appearance.

Their presence is explained by an acquaintance struck up when Kyme met the band in Austin some years back. As she says in the liner notes, “The stars aligned, friendships formed (and) mixed experiences merged.” The result is this short (27 minutes) album which has some very fine moments but overall fails to meet expectations. In the main, this is down to the song writing with none of the songs really packing a lyrical punch while Kyme’s voice is at times not up to the task. The accordion themed ‘Let’s Drive’, in particular, is a sweet enough Tex-Mex tune but it is let down by the vocals.

Kyme is much better when she and the band rev up with the opening song, ‘Oh Love’, a cracker barrel of retro country rock delight sounding not unlike X in their guise of The Knitters. A finely humbucked solo from Prophet seals the deal here. Prophet also appears on the title song, which slinks along in a vampish manner, while ‘I Don’t Care’ is a fine cross of Blondie like sassiness and grease gunned, sixties garage band. She bows out with a song in a similar manner, ‘Want You Back With Me’, with more sixties styled Farfisa organ and loads of twangy guitar.

Ms. Kyme hops onto the Mission Express for a short and uneven journey