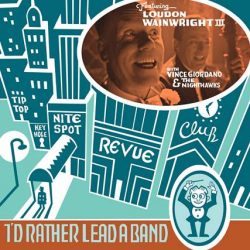 There can’t be many albums reviewed on these pages that have name-checked Irving Berlin, Fats Waller and Louis Armstrong, so this may well be a first. ‘I’d Rather Lead a Band’, the latest offering from six-stringed diarist Loudon Wainwright III, renowned as one of the most original songwriters of our times, is a collection of 1920s and 30s big band songs, including numbers written and/or recorded by the famous names above, as well as many others. Created with the backing of outstanding New York nightclub band, Vince Giordano and The Nighthawks, this album, at first sight, may seem to be an unusual choice for Wainwright, but is in fact an almost perfect fit.

Song curation was managed with the help of Randall Poster, music supervisor on projects such as ‘Boardwalk Empire’ and Scorcese’s ‘The Aviator’, the soundtracks on which Wainwright has appeared, and producer Stewart Lerman. Given the number of songs to choose from that era, this cannot have been a simple task, but after much batting possibles back and forth, 14 songs were finally selected. These include Fats Waller’s ‘Ain’t Misbehaving’, Cab Callaway’s – or Louis Armstrong’s, take your pick – ‘Between The Devil and The Deep Blue Sea’ and Hoagy Carmichael’s ‘Heart and Soul’. The title track, written by Irving Berlin and performed by Fred Astaire in the film ‘Follow the Fleet’, is executed just about perfectly by Wainwright, and ‘I’m Going to Give It To Mary With Love’ is a risqué, innuendo-soaked bit of fun, although an attempt to dilute the innuendo with the line “I mean a necklace” probably doesn’t help to the intended extent. Which is just how Wainwright would want it.

Song arrangements by Giordano are excellent, a feelgood supper club vibe to the fore, and the band rocks and boogies spiritedly throughout. Wainwright’s vocal is pretty well suited to most of the songs, with the sense that the key is just slightly too high, fitting the 20s/30s sound, and his comic timing is textbook. In promoting the album, Wainwright has said he was looking for an anti-nostalgic take on classic songs, but given that these are old-time classics, not sure that is possible, or indeed necessary. This is most definitely a feel-good album, with emphasis on romance and perhaps a more innocent time.

Wainwright has also spoken of temporarily shedding his Loudon Wainwright III-ness. Well, whilst not doubting it will be back, he has certainly achieved that objective with this record.