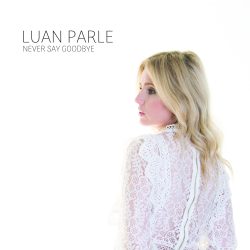 Luan Parle has had an interesting journey. Her first album was released when she was 12 years old. ‘Never Say Goodbye’ is her fourth album, twenty-five years after that debut and ten years since her last release ‘Full Circle’ in 2010. She was at one time signed to Elton John’s management company and supported both him and …. ahem, James Blunt. Parle’s last two albums brought her some success in her native Ireland, but more recently she has been better known for her TV and radio work.

The new album contains 10 original songs, two of them co-written with Dire Straits guitarist Hal Lindes. It is apparent from the first few moments of the album that Luan Parle has an exceptional voice, one Irish critic even described her as “the Emmylou of the Emerald Isle”. The songs, however, rarely do her justice. Most follow a fairly standard formula, being unchallenging and inoffensive love songs. There’s nothing wrong with love songs of course, indeed some of the finest songs ever written are love songs, but these largely indulge themselves in tired cliché. ‘Falling For You’ for instance, states “you’re someone else’s darling and it breaks me in two”. ‘Never Say Goodbye’ offers “I closed my eyes last night, to feel what it was like, when you were here”. Other song titles like ‘My Something Beautiful’, ‘Change Your Mind’ and ‘Falling For You’ tell as much as you need to know about their content.

The music is proficient and professional. The instrumentation is classic folk-country, but with all the sharp edges smoothed down to a marble finish. Even the bluegrass styled ‘Fare Thee Well’ fails to break out of its soft production straitjacket. There’s every chance that Luan Parle will score a hit with this album. It has the kind of widespread commercial appeal that could see it crossing over into mainstream success; it’s absolutely made for Radio 2. However, the more discerning readership of AUK will more likely find it rather dull and uninspiring.