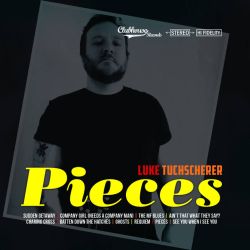 Once of Bedford and The Whybirds, now of New York and with his band the Penny Dreadfuls), Luke Tuchscherer has cooked up a gloriously unholy racket on his third album. Full of the sort of muscular heartland rock’n’roll that’s replete with hooks, chunky guitar work and big choruses, it’s a delight from start to finish. He sets out his stall from with off with the pin your ears back ‘Sudden Getaway’, moves on to ‘The MF Blues’, which is unabbreviated on the vocal, and driven by one of those riffs you’re sure you’ve heard before but actually haven’t. ‘Ain’t That What They Say’ brings the melody without sacrificing the muscle and features a blistering guitar solo. It’s not all full-on though as evidenced by the tender and reflective too ‘Ghosts’.

One of the highlights is the nine minutes of ‘Requiem’, which lacerates the greed of the rich and the parlous state of the nation. It has something of Neil Young’s ‘Southern Man’ about it and an extended howling guitar solo that doesn’t waste a note. Another is the elegiac but defiant ‘See You When I See You’, which surely references his former band when he sings ‘nothing we were promised came our way/some of us got married/some of us had kids, but none of us sold out or wished that we did’.

This sort of music comes from a well-ploughed furrow but few play it with such aplomb and power and Tuchscherer. A hugely enjoyable punch the air album with depth and power.