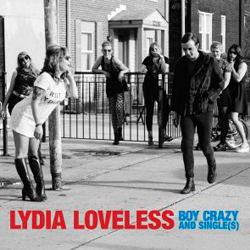 Starting off as a punk inspired country siren, Lydia Loveless soon progressed to offering feisty pop orientated numbers, still imbued with a country punk attitude. Boy Crazy & Single(s) is a handy catch up compendium of her 2013 EP, Boy Crazy along with several songs originally released as singles. Released in both CD and vinyl editions it’s the latter which is likely to appeal to hard core fans as none of these have previously been given the vinyl treatment. For others, the CD is a fine introduction to Ms. Loveless’s music.

Boy Crazy’s five songs are delivered in their original sequence reminding one of what a fine disc it is. Aside from the angst ridden and pedal steel fuelled The Water Loveless and her band ride a rock horse coming across somewhat like Tom Petty & The Heartbreakers, melodic and punchy with Petty replaced by a gutsy female singer. Loosely arranged around a theme of adolescent yearnings, Loveless sings of teenage girls in their Boy Crazy phase while All I Know is somewhat more experienced with none of the teenage fantasies. Lover’s Spat, seemingly written with Jeffrey Dahmer in mind, races along with the energy of Born To Run as performed by Eddie & The Hotrods!

The remainder (the single(s)) are no less impressive. Mile High‘s scuzzy scrubbed guitars accompany words which could be those of a stalker. Come Over is the tale of a woman on the outside wanting in and suggesting ways to get rid of the woman in the way while Falling Out Of Love is a commonplace country song regarding a spurned woman with Loveless in a Patsy Cline mood although one would never imagine Cline singing, “Well, I wish it was me/Falling out of love with you/ So sick of your shit/
And the hell you put me through.”

She tackles three covers. I’d never heard of Kesha never mind her song Blind but suffice to say that Loveless gives this electronic dance song a welcome makeover. Her cover of Prince’s I Would Die 4 You is less successful but that might be down to the familiarity here with the original along with the slightly uncomfortable attempt at funk conjured up by the band. Finally, Loveless performs Elvis Costello’s Alison accompanied only by her guitar, turning in a fine rendition and returning the listener to the adolescent emotional angst of the opening songs.