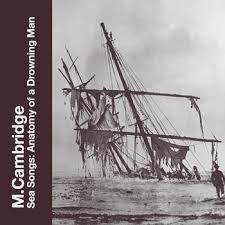 This album is almost a thesis rather than an album in the conventional sense. It feels like an investigation rather than an entertainment. As well as some beautifully crafted songs there are tracks of exposition interspersed with the original numbers. The second track in ‘Shanties Ashore’, for example, opens with a description of sea shanties before Cambridge begins to sing his narration on ‘My Sailor Boy’. There is a further talking track concerning a sailor on a skiff owned by Neil Young!

This is a folk album that traces the legends and stories of the 19th Century packet ships from Ireland and the USA and beyond and as such it is a fascinating work as Cambridge brings his strong and singular voice to brittle tales sung over harmonium or sparse instrumentation. It is certainly a marmite production and one that will not be wheeled out on a Saturday night along with the sweet trolley. There are highlights.‘Serafina‘ is a delightful acoustic track with some beautiful arrangement, almost Drakelike ( that’s Nick not ….well you know) and ‘The Fisherman’s Wife’ is a delicate and brooding hymn.

Investigate by all means but don’t say you weren’t warned. There are delights here but they are knotty and dark.

If 19th Century Packet ships are your thing... dive in