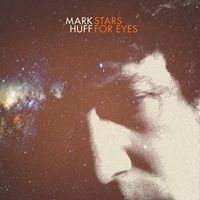 Mark Huff gives the impression of being one of those people who can pick up a guitar and make up a song on the spot that will be dripping with hooks and full of memorable melodies. He makes it sound so easy,  as if he’s not even trying. The songs just flow out of him, flitting between styles without missing a beat. ‘God In Geography’ slides in some new-wave organ and lightness of touch, it seems to be his natural habitat. But so does the pedal steel licked ‘Carolina Blue’ and that’s Huff’s great strength: he can switch styles without it feeling forced, it’s all just part of one big dressing up box.

So there’s the barrelling country of ‘Nightingale’ with backing vocals, jaw harp and other Country touches that seem imbued with the atmosphere of back porches and roadhouses. Then comes the more experimental ‘Heart Beating Without You’, a mixture of acoustic guitars and a woozy over-the-counter pharmacological haze punctuated with bursts of country rock, the liquid drops of piano dripping down the rabbit hole. Then we’re back into the harsh reality of ‘I Know You Don’t Want My Love’, which again stretches out past the five-minute mark and indulges in some sonic experimentation. The rather more rock based ‘Albatross’ is the last original before a closing cover of Leonard Cohen’s ‘Almost Like the Blues’ with its itchy funk jazz and deeper vocal which seem a little out of place. Huff doesn’t need other people’s songs – he’s a strong enough writer and performer to push his own merits.