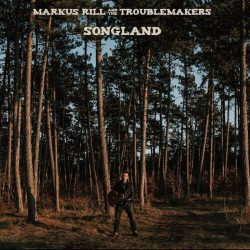 Hailing originally from Germany, Markus Rill owes his Americana roots to his formative years spent in Austin, Texas. Playing with the likes of Townes van Zandt, and praised for his songwriting skills by highly respected artists such as Gretchen Peters, Rosanne Cash and Ray Wylie Hubbard, Mr Rill clearly has something to offer.

‘Songland’, with its generous helping of 15 songs, offers a wide range of styles under the Americana umbrella. Folk and roots mix with gospel, country rock, and soul.  The potential downside of including that many tracks on an album is a propensity for dips in quality along the way and, with a couple of up-tempo but unexceptional country influenced songs to kick off the album, that fear is soon realised here.

However, things pick up and, on the slower numbers in particular, Rill brings a lovely, gravelly Cohen-esque warmth to his vocals. These are the tracks, when Rill almost appears to be speaking the songs, that stand out from the rest. For the absolute pinnacle look to the wonderful ‘Swampland of The Mind’ with its great groove and the gorgeous female harmonies of Texas singer Elizabeth Lee. Lee’s vocals are a defining characteristic of the album and, taking that reference to Cohen one step further, they bear comparison at times with the warmth and depth that The Webb Sisters and Sharon Robinson brought to Cohen’s later albums.

Those vocals return to the fore on ‘Fearless’ with its relentless gospel, organ driven groove. That organ returns to prominence on the very different ‘A Mistake Like Me’ which, as if to emphasise just how much the album switches its musical styles, manages to bring something akin to a tango rhythm to proceedings.

Rill is keen to highlight the influence his band, The Troublemakers, has on affairs and the sound of the album. If those aforementioned tracks allowed the organ of Ecki Hudepohl to shine then ‘Conscience County Jail’, a beautifully paced and played song, features and highlights the subtle but very effective banjo of Maik Garthe.

If ‘Songland’ is a little uneven in places then Rill has still delivered an album containing a number of decent songs that not only showcase his own songwriting talents (there are no high school heartbreaks, making out under the bleachers or beer runs here) but also allow his co-stars to feature prominently – and for that Mr Rill should be applauded.