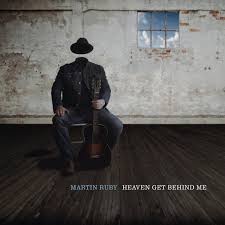 Like a half-heard tune from another world ‘Fellini Is Dying (drunk in the afternoon)’, the opening track from Martin Ruby’s ‘Heaven Get Behind Me’, emerges from behind traffic and crowds recorded on New York’s Sixth Avenue. It is this insubstantial quality, barely rising above the ethereal and indistinct, that characterises all the songs on the album. There is something here that roots these songs deeply in the whole history of modern American music: written on a hundred-year-old parlour guitar and then performed on vintage instruments like an 1887 August Pollman guitar and a 1929 Selmer tenor saxophone.

The vocals for ‘Long Tall Man’ are drenched in the sounds of crickets and an approaching rain storm with occasional chords and picked notes from a guitar so the song seems to emerge from some lost corner of the mind rather than through a conscious writing and recording process. It is a little like Marco North, the singer-song writer behind the Martin Ruby persona, is whispering these snatches of dreams in your ear.

Marco/Martin’s voice has the deep, gravelly growl of Tom Waits and the unusual sparse instrumentation and picked guitar hints at the slower songs on Waits’ ‘Swordfishtrombones’ and ‘Frank’s Wild Years’ albums. But whereas Waits tempers the darkness of his world view with forays into up tempo and uplifting sounds there really is no lightness to the shade that dominates ‘Heaven Get Behind Me’. It would be possible to say that ‘The Letter Reader’, about a prisoner awaiting death, characterises the mood of the album “He killed them all, With an axe so small, That it sunk to the bottom of the river”. ‘Sebastopol’ might be as upbeat as it gets: “Last night I met the man in the blue suit, He said he walked with the angels. Sometimes I wake up to forget, That I fell in love with a mystery girl”.

Arising from the America of William Faulkner and the world of down-at-heel motels and fractured lives surprisingly the songs were actually recorded at home in Moscow where Marco had followed his infant daughter whose mother had taken her across the world. Recorded at home in a “Soviet-era apartment” and interrupted by a brush with cancer it is inevitable that there will be a bleakness to the album. There is the taint of the grave, or “Potters-field” as ‘Stone Blind Rain’ would have it.

The album evolved initially from the song ‘Marfa’ whose imagery encompasses all the themes of mortality, forgiveness and regret that underpin the rest of the album. Before culminating in the penultimate song ‘Kodachrome Shangri-La’: “I remember his face that night, When he asked if I would ever see Shangri-La”.

If you like the more downbeat end of the Tom Waits songbook and the intimacy of later Nick Cave albums then this is a perfect companion for your gloomier moments. Just don’t expect more than the wryest of smiles.

Exploring mortality, pain, disappointment, forgiveness and grace. Great art, but not many laughs.

About Peter Tomkins 5 Articles
Over the last fifty years I have probably tried to learn most instruments from the guitar to the trumpet, taking in the accordion and mandolin along the way. And failed. But as a music lover I started writing for magazines and websites about music around ten years ago. It's a break from my day to day life as a teacher and leader.
Website