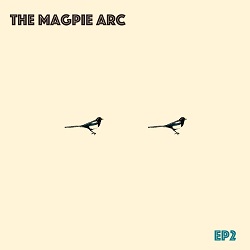 The Magpie Arc are Nancy Kerr and Martin Simpson (with Alex Hunter – Bass, Tom A. Wright – drums/percussion, Adam Holmes – guitars and vocals), and ‘EP 2‘ is – surprise, surprise – their second release. It’s a mere four songs long – more’s the pity – with two by Nancy Kerr, one by Martin Simpson and a Holmes/Wright co-write. The EP opens with a piece of English folk-rock perfection in the form of ‘Darling Charms‘ which has a beguiling Nancy Kerr leading a dissolute life in the hands of whiskey and wine. It dances through half-serious confessions of failings “I’ve kissed farewell to whisky and said goodbye to wine then I’ve woken in their arms next morning” – half-hearted because whatever misadventures these companions may lead her to they really aren’t to blame “I’ve made so many errors in the thin embrace of wine but love I promise I can also make them sober.” Shot through with perfectly matched electric folk guitar and a swirling skirl of fiddle it’s a wonderful song adding another character to a tradition of abandoned and carefree women.

Martin Simpson’s melancholy vocal on the funereally paced ballad ‘I Should have Walked‘ cleverly turns the previous song on its head. Here is the misery of having a partner who is in thrall to an addiction, and the final unwilling acceptance of something one has known for years – they love you less than they love the substance they are abusing: “you love that stuff you’re doing like it was your only friend“.  Here the electric guitar trickles out like a stream of tears, and the fiddle sounds like an unhappy attendee at a dismal wake. Martin Simpson convincingly conveys a soul finally destroyed, there’s no victory in this final leaving: “I should have seen the damage you were doing / back then when you were handsome and you still knew how to laugh / But I can’t stand to watch you in your chaos and your ruin.”

The shimmering ‘Cinnabar‘ is another slice of that very English take on folk-rock – in no small part due to the excellence of Nancy Kerr’s lead vocal. It’s a song of a primal moon and sun worship – and the dawn: with the singer emotionally -and passionately-  tied to these twin celestial objects. The moon light “wearing a veil of red” is swept away by the emerging Phoebus “I mourn you lowly cinnabar born in a crown of gold / In my burnished lover’s bed I have forgotten the cold,” It’s one of those songs that hints at mystical depths without ever fully revealing the truth.  The closer ‘Roll your Stone Away‘ is a rough and rowdy finale, with a fiddle part with a touch of the Cajun and percussion that stumbles through the song rather than setting a rhythm.  With hints of self-revelation and the general escape from unimpeded movement in the lyrics, and a guitar which rips a jagged edge through the song ‘Roll your Stone Away‘ is a triumph of its own – or maybe a Vincent Black Lightning.  It’s been hinted a few times but there’s a definite late sixties-early seventies feel to this collection, it evokes the likes of Fairport Convention at their early and innovatory best. And, perhaps most significant of all, it’s a collection that does exactly what an EP should do – leaves the listener wanting more (fortunately there is ‘EP 1‘ to explore). A gem – a small gem, but a gem nonetheless.

A band that would be worthy of The Decemberists' worship.

About Jonathan Aird 1300 Articles
Sure, I could climb high in a tree, or go to Skye on my holiday. I could be happy. All I really want is the excitement of first hearing The Byrds, the amazement of decades of Dylan's music, or the thrill of seeing a band like The Long Ryders live. That's not much to ask, is it?