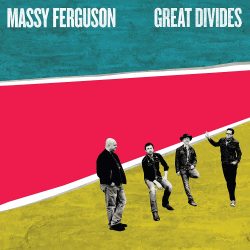 In January 2017, AUK colleague Dave Cowling posted a positive review of a previous release by Massy Ferguson, ‘Run it Right into the Wall’, and came to the following conclusions: “‘Into the Wall’ encapsulates everything that is both good about them and this genre …. MF are the kind of band that are the bedrock of this genre…. they make records that are beautifully crafted and worthy of a wider audience but are destined only for diehards; which is a shame.”

The current offering, ‘Great Divides’, their fifth would not alter any of those comments. Massy Ferguson has been together more than 13 years and is led by Ethan Anderson and his songwriting partner Adam Monda – though all songs are credited collectively to the band, so let’s not forget Dave Goedde on drums and Fred Slater on keyboards. They are based in Seattle and, touring extensively, are a good live listen.

The album kicks off in lively fashion with ‘Can’t Remember’, a reminiscence of a drunken meeting between Anderson and his future wife who was working in a bar at the time. What will really impress is the quality of his voice which throughout an album of some variety pulls everything together very nicely. A little research will reveal a host of supposed influences including, yet again and perhaps rather lazily, Springsteen. You might be better served to think in terms of genre – namely rock with some country flavouring.  That said they are a good deal nearer rock than country, but that’s not an issue.

The album moves on through the first three tracks with a variety of feel and instrumentation and the organ fills on ‘Drop an Atom Bomb on Me’ are particularly appealing.  It’s all very well crafted; pleasingly subtle at times and with a variety and musical tightness that sustains the listener’s interest.  That voice is the peg that it all hangs on.

‘Maybe the Gods’ includes a female vocal by the admirably named Adra Boo; ‘Saying You Were There’ slows things down with a dark tale – it’s a shame that the CD packaging is so minimal and a lyric sheet would not have gone amiss.

A highlight is ‘Mommas in the Backseat’, almost a spoken word, cautionary tale about youthful bravado.  It’s possible that the collective tongue is slightly in cheek in the line about the Star Wars blanket – but either way it works for me.

‘Wolf Man’ is one of the weaker tracks along with ‘Don’t Give up on Your Friends’ but proceedings finish on an up-tempo guitar driven note with ‘They Want That Sound’.

Dave Cowling questioned what it is that might lift a group from the mass to 1st division status and listening to Massy Ferguson it seems a good question to pose.  Great tunes, interesting instrumentation and arrangements, good musicianship and a variety of mood all topped off by a cracking voice – what’s not to like?

Certain not to disappoint - a mature work from a talented band