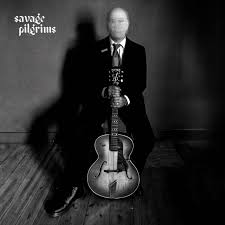 Matt Hill’s first release under his own name rather than the Quiet Loner moniker that has graced a number of high-quality releases in recent years opens with a jaunty banjo-driven lament ‘Stone and Bone’ which sets the tone perfectly with its angry tone of injustice about the forgotten workers who created the ‘square mile’ of London. Hill imagines them coming back and running amok. The instruments are miked close and the vocal is in your ear.

Similarly, you can almost hear the hum of the valves and crackles of long-abandoned analogue recording equipment at work on ‘Save Your Pity’ as the narrator dismisses the sentiment in the face of a life lived without regrets. It feels timeless, like some ancient recording disinterred from a mausoleum, deeply atmospheric without being cod or fanciful. There is great production all round and this continues with ‘The Exile of DH Lawrence’, encapsulating as it does a gorgeous spiky guitar bridge, not at all out of place in its traditional setting. ‘Gary Gilmore’s Last Request’ concerns Johnny Cash’s final call to Gilmour before his death sentence was carried out. Hill’s pean to Cash’s ability to reach out to all walks of life reflects his love of the artist and his way of telling stories both through the arrangement and the dignity inherent in the lyric.

And the album unfolds in this quietly spectacular way as track after track appears. These are small operas of sound carefully constructed and lovingly tooled and Hill should be delighted with his achievement. The base of voice and banjo or guitar is joined in every instance with sympathetic and perfectly judged accompaniment, all within the roots tradition but not ensnared by the form. Thoroughly recommended.

A debut in name only as Hill produces perhaps his best