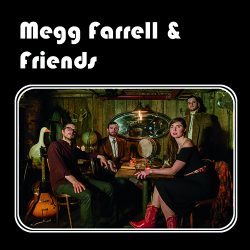 It’s easy to imagine you are listening to a live set in a smoky dive bar in the French Quarter, New Orleans when you hear ‘Megg Farrell & Friends.’ Led by Brooklyn-based Megg Farrell, the album is a mix of covers and originals set to a mix of jazz, ragtime and country. Farrell has a strong, bluesy voice reminiscent of Billie Holiday and it comes through in songs like ‘New Orleans Waltz’ and ‘New York Love Song.’  Obvious in both these song topics is her attachment to place and her bio indicates she’s travelled the length and breadth of the USA as well as living a while in Paris, France.

What results is a mix of genres that reflect a love of jazz as well as being seated in Americana and, to a lesser extent, indie-rock.

Album-opener ‘Feeling Single’ is a breezy and light-hearted number. It starts with a strong a cappella start which shows off Farrell’s vocals (sounding a bit like Cary Ann Hearst of Shovels and Rope). It ends a touch on the twee side of country. There’s a bit of saxophone in there too: it’s a little disjointed as a record.

A couple of tracks veer into a more indie-pop vibe – this is felt most keenly through the lyrics chosen – the “a whoo hoo” of ‘Lovesick Harmony’ feels (ironically) not that harmonious. ‘When I Learned to Sing’ is almost medieval in vibe and you can imagine Farrell skipping through a faerie glen as she sings “throw away your promises, throw away your rings ‘cos I am now worth everything because I learned to sing”

The covers on the album are perfectly decent but don’t do anything groundbreaking. There’s a vocally beautiful version of Emmylou Harris’s ‘Tulsa Queen’ and a way too fast delivery of Gram Parsons’ ‘Ooh Las Vegas’: it just feels a bit aggressive.

There’s enough to the tracks to make you want to listen. The variety of styles is engaging and Farrell’s vocals are lovely. However, it doesn’t quite do enough to make you engaged. File under sit back, chill out and sip on your Hurricane cocktail.

Chilled out, dive bar vibe in this mix of covers and originals set to a jazz, ragtime and country sound.