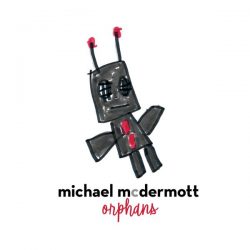 As well as having what may be the worst cover of any album this year ‘Orphans‘ also isn’t really Michael McDermott’s latest album – that’s actually already in the works – it’s more of a constant itch that he’s finally scratched. These are mostly songs that have been around for a while, ones that were written at the same time as previous albums but which didn’t make the cut – but also weren’t worth forgetting about altogether. They’ve hung around, and their persistence has been rewarded as they have finally been properly recorded and released. Michael McDermott has another reason for the album title – with the passing of both of his parents he has felt cut-free in the world, rootless and displaced and that’s a feeling that crops up repeatedly across the album.

Michael McDermott’s singing voice lies somewhere between Springsteen at his more earnest and Tom Waits’ melancholic musings over something strong late at night in a bar full of losers. The latter is emphasized on the slow ballad ‘What if Today Were My Last‘, which questions a lifetime’s worth of decisions and holds them up to doubtful inspection: “was I generous enough with my heart or did I wear my pride like a mask?” he asks, before reflecting that “once we were like warriors but those days soon came to pass / once we were like sunshine and what if today were my last?” It’s downbeat, but optimistic in the hopes for at least acceptance and forgiveness, enough for “friends to raise a glass” when it’s all over. There’s more of this feeling of time slipping by, and away from one’s control, on ‘Sometimes When it Rains in Memphis‘ which recalls an old love that fell apart and has McDermott ruefully reflecting that “maybe we were just too dumb to know that these were the best days of our lives“. ‘Los Angeles, A Lifetime Ago‘ takes these nostalgic threads and creates a delicate tapestry of images and emotions, reflecting on a period of McDermott’s life which by his own admission didn’t go so well. It’s a series of minor key memories which creates a vivid picture of a mournful soul having a dark time in the City of Light.

‘Orphans‘ isn’t an album replete only with despair – ‘Tell Tale Heart‘ is a vibrant rocker pitching straight ahead upbeat positivity and a determination to “make the most of this time in this world we live“. Whilst the more acoustic ‘Black Tree, Blue Sky‘ may recall the ending of a love affair, symbolised by the black tree, and the struggles of life on the troubadour’s road, it also suggests that there’s always blue sky as well – despite the toughness of life there’s always an open vista to aim at. It’s a balance that runs through the album.

Michael McDermott reflects on his life with some old friends.