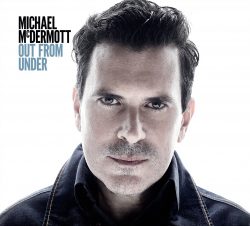 Rarely can an album have been so aptly named as Michael McDermott’s latest effort ‘Out From Under’.  Now four years sober after 20 years of drink, drugs and even jail, McDermott has released a gem of an album that continues and even exceeds the high standard reached on his last release ‘Willow Springs’. Straight out of the blocks we get a glimpse into the dark underbelly of the addict with the self-destructive and nightmarish world that is so graphically depicted in the rhythmic opening track ‘Cal Sag Road’.

“Now back at the hotel, things started out alright.  Things got pretty hazy, I remember a fight.  Rita was dead in the bathtub, I must have strangled Gwen.  While we were getting drunk again”.  The lyrics in the final verse are best left to the imagination and thankfully for all concerned, the sordid ménage à trois story depicted in the song is allegorical rather than autobiographical!

Given his backstory of addiction and the apparent headlong , uncontrolled rush to the bottom after his initial, highly heralded success, it’s clear that McDermott is in reflective mood and songs like ‘Sad Songs’ and ‘Sideways’ look back at a life on the road that was leading inexorably towards an untimely end and he openly admits that at his lowest ebb he considered suicide by cop as an acceptable way out.

Thankfully, with the support of his wife, fellow performer (and sometime collaborator in The Westies) Heather Lynne Horton, he has fought off the demons and has now created and produced two top class solo efforts in a row.

There isn’t a poor track on this album and the initial enjoyment only increases with repeated listening, with the wonderful title track ‘Out From Under’ and the ambiguous ‘God Help Us’ being among the many standouts.

Working from his home studio in Illinois seems to suit McDermott as he is able to fully immerse himself in his music with a work ethic that is borne of his Irish/south Chicago heritage.  In addition to singing duties, he played guitar, bass, piano and keyboards with others contributing either remotely or in person at his Pauper Sky Studio.

This clear-eyed and sober version of McDermott is finally living up to the potential and excitement that surrounded his original rapid rise to fame.  ‘Out From Under’ is a high-quality piece of work with excellent musicianship and extremely well-crafted lyrics.  Miss it at your peril.

A standout album that confirms McDermott is back on top form.