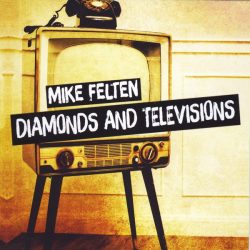 It’s refreshing to come across an Americana album that’s essentially a fun listen, so kudos to Mike Felten for that feat alone. A Chicago native, he’s been a record store owner, open miker and gigging troubadour for the best part of half a century. Daresay that he’s pretty much seen it all…

Diamonds And Televisions is, despite Mike’s veteran status, his first record with a full band in tow. They kick up an impressive storm too. Opening track It All Ends Here is a brooding Diddley stomp with largely indecipherable, menacing lyrics. Bo would be suitably proud. There’s a Van Morrison-esque bluesy/folk lament in Bohunk’s Daughter, and Emma’s House continues in a similar style. Shades of Dylan and Petty feature heavily in the songs and band arrangements. Pa Kettle’s Bastard Son is a great song title – a hard luck blues that motors along moodily without exploding into genuine anger. Along with this track, the record as a whole might be fairly critiqued as lacking in real bluesy fire, but then again that might be a plus point for many listeners.

Moving along, Get Lost is an enjoyable country stomp – Mike’s girl giving him a far from gentle adios. Statue of Liberty features some classic Dylan-esque unharmonic harmonica playing. Closing track Mike’s Last Will And Testament is a sweet slice of New Orleans and Dr John inspired Big Easy jazz-blues. Lyrically it quite cleverly borrows lines from St James’ Infirmary as Felten instructs us on the disposal of his ashes and meagre estate. The band do Mike proud here – along with the opening track these two bookends are the standouts.

Felten’s voice perhaps isn’t the strongest; it’s sometimes pitchy and perhaps that’s why it’s a little low in the mix. All of that can be forgiven however – this is rootsy blues after all and fans won’t be expecting Enrico Caruso. Ten tracks in a little over forty minutes show that Mike and his band are much more than Illinois also-rans.

Country, Blues and Folk blended together by a Windy City old stager; the results being surprisingly enjoyable.