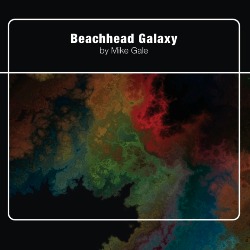 ‘Beachhead Galaxy’ is the latest solo album from Mike Gale (Co-Pilgrim).  It’s a dreamy, ethereal sounding piece which is fitting for the subject matter. Set in space, in the year 2412 where harmony across all lifeforms reigns and war is forbidden, the album’s focus is on how this all might change. A traveller from the Beachhead Galaxy is set to arrive on planet Styx MM with a secret that could destroy life itself. The scene-setting is part of the album’s sleeve notes, there is no doubt that Gale sees this as a concept album of sorts. There’s also a hint on his Facebook page that this may be the first in a trilogy.

‘Jubal Early’ starts the album with an upbeat and synth-led song announcing the arrival of our mysterious traveller – we’re on a spaceship looking out into the dark. The song title references a character in the Firefly finale ‘Objects in Space’. Jubal Early was a bounty hunter – is that what Gale is leading us to? There’s a sense of change in the lyrics. We can see a shift from the need to live to rule or to go somewhere “a seed is allowed to grow/free of supernatural sun”.

Having listened to the tracks a few times, it has a weirdly meditative effect. To find yourself at the end of the album without being entirely sure how you got there is down to the soothing  nature of the songs. This does mean though that Gale’s voice often becomes part of the melody  rather than the storyteller he needs to be for this to fully work.

There are beautiful moments in the album. ‘Step out of time’ catches you with its swirling arrangement and harmonies. Cloud warm is a phrase repeated through the album and the song of that name has a hint of Mercury Rev, It’s a love story tinged with sadness. It’s gorgeous – layers building from acoustic guitar, to drums and keyboard. It talks of simple times outside in the sun, getting some air because you feel suffocated. But in this new world, do these phrases mean the same thing anymore?

The are some delightfully whimsical songs. ‘Hokum in the Hook of my Heart’ is a whole lot of fun. More upbeat than the rest of the album, it’s got a touch of the Beach Boys to the harmonies. The unusually named ‘Dog Backwards is Cheese’ is a poignant look at how missing someone can make you see relationships in everything (even down to the nail that holds the picture in the wall).

‘Beachhead Galaxy’ is an album that doesn’t quite pull together the sum of its parts. There are compelling lyrics, gorgeous musical arrangements, but as a concept it’s not entirely clear where it is heading.