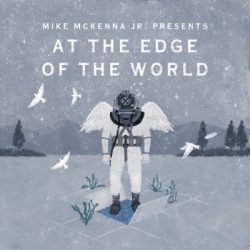 With his second LP Mike McKenna jr. has constructed an intricate and finely crafted piece of work that invites us to consider what he calls the “distinct local culture” of his home manor. Given that the location of the ‘manor’ in question is the island of Cape Breton in Nova Scotia, Canada it seems entirely fitting that the record is called ‘At the Edge of the World’ and the soundscapes on offer perfectly capture the otherworldly yet hardscrabble nature of such remote locations.

It’s not really enough to say that the record asks us to ‘consider’ Cape Breton however. It does much more than that, encouraging us to immerse ourselves in the songs and to experience the lives and atmospheres of the Island.  Listening to this record we come to feel as well as to know ‘the Bay’ as our own and McKenna jr. himself has noted that he wants “anyone from any small town” to be able to relate to the songs. Whilst he is clearly rooted in the Cape Breton community and custom, he fuses this heritage with modern pop, indie-folk and Americana influences to produce songs that are both nostalgic for his past but also hopeful for all our futures.

It is clear that none of this is a result of accident or happenstance; it is all meticulously planned and arranged. McKenna jr. and producer Quin Bachand worked together before recording began to ensure that each song was formed in a way that reflects the “intricate Canadian musical tradition” and retained the ‘Cape Breton lilt’ in its lyrics and melodies. Beyond that, Bachand was responsible for assembling a tight-knit group of musicians who could deliver the ‘sonic palette’ called for by McKenna. These included Bachand himself on guitar, piano and strings, along with Colin Savoie-Levac (guitars & bass), Oli Bernatchez (drums), Benjamin Vallee (pedal steel) and Béatrix Méthé (harmonies).

The album is short, just 8 songs and clocking in at under 30 minutes but is still effective at carrying us to the rivers and ports, mountains and forests and coal mines of McKenna jr.’s working-class home town. The collection of stories on offer here is heavily redolent of the down to earth, hard-working lifestyle of this isolated coastal community and McKenna jr., with the help of Bachand, renders it in such a way as to make it universal, interpreting it as accessible and meaningful to the rest of us.

Despite its brevity ‘At the Edge of the World’ is in no hurry to get where it is going. It is a dignified and enduring record. Everything is kept close at hand, the vocals have an immediate intimacy that emphasises the raw soul in McKenna jr.’s voice, which he uses to build the tension of the tales he is telling. Every small undulation of timbre and character feels like it was lovingly laboured over and is demanding of our full and undivided attention.

There is an abiding tone to the record that comes from this measured approach, which is introspective, almost sombre but also has a dreamy faraway quality. This is created by a series of delicate guitar melodies and a dry, saturated production laced with moments of surprise; a striking psych-like bridge in ‘Caught in the Middle’, the intimate sound of ‘The Wolf’ and the pleasing harmonics of ‘My Room’.

The musical settings dreamt up and delivered on ‘At the Edge of the World’ provide ideal context for McKenna jr.’s songs in which he examines and recounts events, both real and fictional, with a clear eye and an empathetic heart. The writing of the record was influenced by his immersion in tragic news stories about life and death, historical protest songs and the poetic visions of Breton locals as well as his experiences growing up in the working-class communities and it manages to capture single moments in time and space that also serve to offer universal insights.

He seems to compile songs piece by piece, not some kind of random Burroughs like cut-up technique but as someone poring over a 2,000 piece jigsaw of Frida Kahlo while the lockdown world spins uncontrollably outside. Take the opening and title track for instance. McKenna jr. was occupied by news stories of the Swissair 111 disaster, the Titanic sinking and local tourist drownings in ‘Peggy’s Cove’ and he becomes the narrator for the thoughts of the first responders to each of these events. His own view is that he tries to “find subjects that evoke heavy emotion, true stories when possible, and slowly grow the song from there…” He is certainly successful on this record as a sense of loss, even a certain helplessness stalks the grooves. This is tempered by the defiance heard in the more overtly political material like his cover of local songwriter Rita MacNeil’s ‘Working Man’ and the ‘The Wolf, his setting of Dawn Fraser’s 1924 poem, a coruscating socialist critique of the practice of local mining companies.

This is clearly a significant record for McKenna jr. and the community in which it is rooted. For the rest of us it is a peephole into a world we know little of and a thoughtful comfort from beginning to end.