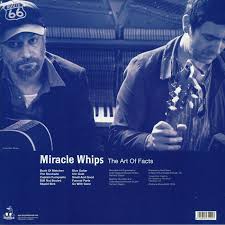 ‘The Art of Facts‘ is the debut album from Portland, Oregon based band ‘Miracle Whips’. Described by the band as ‘porch music’, it is gentle and reflective, with subtle and well-crafted songs, featuring evocative impressionistic lyrics, often shading towards the apocalyptic, and musical arrangements introducing a variety of instruments and influences.

Lead writer Jason Merritt has previously featured in bands Whip and Timesbold, while fellow band members Paul Dillon and Jeff Mercel have both featured in Mercury Rev, along with Miracle Falls and Sparklehorse (Dillon) and Ultraam and Grand Mal (Mercel).

Opening track ‘The Book of Matches’ sets the tone for the album with a chilled vibe, the lengthy introduction gradually building with acoustic guitar, percussion, second guitar, then pedal steel and keys, before the unsettling alt-hymn themed vocals draw the listener in —“Let us read from the book of leeches/Lets read from the book of notes/let the stumps deliver speeches/from the slit in their bloody throats”. The song has both musical and lyrical echoes of Talking Heads or Lou Reed, influences heard elsewhere on the album.

Featuring ten songs, the longest track is ‘The Stockade’, at just over six minutes, with a lyrical musical arrangement, and hints of Ryan Adams styling, found also in ‘Funeral Parts‘ (“I’m a man of detail/and funeral parts/Wendy Carlos/and Karl Marx”).

‘Blue Guitar‘ is described by the band as ‘the best song the Pogues never wrote’, and the influence is clear, on a song which features fiddle, saw and mariachi brass, saw also featuring on the albums’ closing track ‘Go With Gone’, along with an updated spaghetti western-style low-end guitar riff, and lyrics suited to troubled times “Naked encounters/with suicide pacts/violent admissions/to a lack of facts”.

‘5 in Gold’ strikes a more uptempo note, with a  JJ Cale 12 bar boogie feel, while ‘Stupid Bird’ has hints of Becks’ characteristic playfulness in the arrangement, featuring prominent slide guitar and harmonica. ‘Still Souled‘ has a rolling piano intro, and strong piano hook, with a world-weary refrain “And my face/is as old as time/and that times’ not mine/and at times I’m fine/like wine”.

A subtly engaging album, its chilled vibe enhanced by its varied song voicings.

Porch music for our troubled times