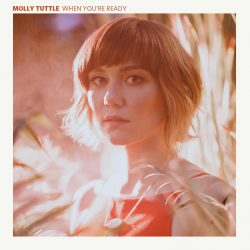 Any artist who can secure the talents of someone such as Jason Isbell on background vocals for their debut album clearly has something going for them, and Molly Tuttle certainly has something going for her. Having already bagged a hatful of industry awards, Tuttle’s first full album release ‘When You’re Ready’ is an album of songs all written or co-written by her about the various stages of relationships – beginning, on the journey, break up, post break up, confusion – very radio friendly, and bursting with musicianship of a high standard.

Isbell’s vocals appear on the album’s opener, ‘Million Miles’, featuring some pretty guitar work with hints of Suzanne Vega in the structure. Lead single from the album ‘Take the Journey’ has organ swells supporting excellent Union Station style picking and the skilled guitar work continues with ‘Make My Mind Up’, the most radio-friendly of all the songs here.

And so it continues in the main; well-constructed songs, underpinned with admirable guitar skill, through the slower title track and ‘The High Road’, which has an Indigo Girls flavour (which seeps into other songs, too). Tuttle does seem to have a mild obsession with water, with several references to oceans taking her away, and driving into the sea, among a number of others – a lifeboat even gets a mention! This could (tenuously) be the result of being raised in the San Francisco Bay area, one supposes.

A couple of tracks in the middle of the album are not as strong as the earlier ones, but it finishes very strongly with the final track, ‘Clue’ which is one of the standouts. This album is very listenable and showcases Tuttle’s likeable songwriting and superb guitar skills.

A very accomplished debut album from a talented artist