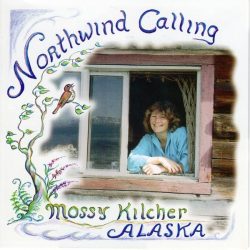 Over the last few years labels like Light in the Attic, Finders Keepers and Tompkins Square have created a small industry based around the re-issue of long lost, forgotten and overlooked recordings by usually equally obscure artists. There have been some genuine finds, but most have failed to reach out beyond academic interest and a small obscurest and collectors’ market. By definition, such releases are a finite resource in terms of both quantity and quality. The well will inevitably, sooner or later, run dry. However, the evidence of this re-issue, suggests that there is still some crystal-clear water waiting to be drawn up.

Like many similar releases, the back story is nearly as interesting as the record itself. In 1977 Mossy Kilcher, as she is now known, self-released ‘Northwind Calling’ as a double album under the name Mossy Davidson. Very few copies were pressed, and a decent original copy will now set you back in the region of £100. Mossy Kilcher was raised on a small farm near Homer, Alaska where her Swiss immigrant family settled in the 1930s. She still lives there today and ‘Northwind Calling’ is very much a homage to and celebration of her homeland. The Kilchers are a musical family, Mossy’s niece Jewel being Alaska’s most famous star – but don’t let that put you off.

The songs are largely personal or observational, tinged with a refreshing innocence, even naivety at times. Mossy’s voice has a verdant charm which adds character and a sense of authenticity to them. Musical accompaniment is sparse, consisting of acoustic guitar, banjo, piano, flute and harmonica. The songs are allowed to breathe and flourish against this background. The remoteness of its Alaskan location is tangible on this charming record. Sit back, close your eyes and listen. You can almost smell the pines.

Great as it is that recordings such as this are being made accessible again, at present Tompkins Square are only issuing ‘Northwind Calling’ in digital format. Hopefully, sufficient interest will be generated to trigger a release in physical formats too. Having failed to find a couple of £50 notes down the back of the sofa, a more affordable re-issue would be very welcome news.