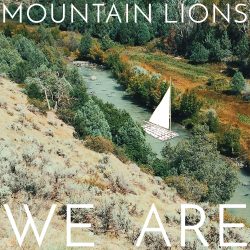 After contributing to the sunny, catchy pop of The Lighthouse and the Whaler, singer-songwriter Steven Diaz relocated to the Research Triangle in North Carolina – an area covering three counties in the north-central part of the state that includes the capital city of Raleigh as well as Durham and Chapel Hill. The area is a perfect marriage of college towns and progressive tech/urban chic surrounded by miles of Piedmont farmland (once dominated by tobacco) and beautiful, deep woodlands.

It’s this duality of technology and the agrarian lifestyle that inspired Diaz’s newest project, Mountain Lions. When the day ends, he leaves his tech job for his homestead, where sixty-five free-range chickens roam, and his thoughts move from ones and zeros to love, travel, subway musicians, mortality, and mermaids – though not necessarily in that order.

Mountain Lions released an EP in 2017 to whet the appetite of the indie-folk world. ‘Calm Wind, Starry Night’ was the perfect teaser for the project’s first full album, ‘We Are,’  produced by Dave Douglas (Relient K) and Rob Parr (The Dear Hunter).

Diaz, a soft, soothing tenor with an impressive falsetto, opens the album with the driving ‘Own Way Home’ before settling into the country-rock of ‘Dust and Dirt’ in which the narrator is haunted by the accomplishments of those who came before. He sings, “I can’t pretend to be my father’s son / No, I cannot do what he’s done.” Later, he decides that both are necessary and offers, “I am dirt / you are dust / the Earth belongs to both of us.”

First single ‘California’ is an audio travelogue tailor-made for a summer drive with echoes of The Band – Levon Helm-type groove included – and inspired by manifest destiny and beckoned by the cosmic ghosts of Laurel Canyon. Witnessing a subway musician in New York City inspired the gentle ‘A New Light’ and a bossa nova beat carries a love story between a man and his mermaid in ‘Fishbone.’

Anchored by a rolling acoustic guitar line and a military snare, ‘In the Valley’ underpin images of a horse in a meadow, a brook by an old willow tree, as well as contemplations of one’s mortality to a track reminiscent of ‘Hearts and Bones’-era Paul Simon.

The second half of ‘We Are’ is backloaded with ballads, beautifully done and perfect for keeping a consistent nocturnal mood (as evidenced in the sprawling ‘Deep Blue’). Though it can drag a bit toward the end, it does reward repeat listening and holds together as an entire cohesive album.
With ‘We Are,’ Mountain Lions stakes its claim as intelligent and melodic, atmospheric and lyrically captivating indie-folk for those who like to let their minds – and their chickens – roam free.